A A A
He probably goes into history not only as the first Afro-American elected and re-elected president of the United States – but also as the only US president who took oath twice for each of his two terms. On January 20, 2009, Chief Justice John Roberts fumbled when reading out the oath, requiring Obama to take a second oath later in the White House.
The twos did not end with two terms and two oaths. Obama, the father of two daughters, will be known in history for ending two wars – one in Iraq and the other in Afghanistan, from where he hopes to complete troop withdrawals by the end of 2014.
Political or personal trivia apart, a US president plays for history in his second term. Thus when Obama spoke on Monday, idealism was at its peak. But he is not an idealist dreamer who thinks of world peace, world government and the rule of law in every sphere of international relations. Heis different. He is what other US presidentsin recent timeswere not. Going by his political behavior so far, it appears he is capable of overcoming lobby pressure. He has assertedpresidential independence. 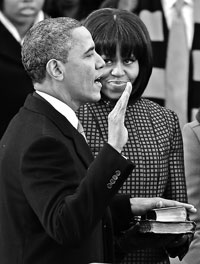 Thus it comes as little surprise when Obama, a former Harvard law lecturer, in his inauguration speech raised the bar remarkably high on many controversial issues ranging from gay rights and immigration to gun control, the economyand climate change. If he is aiming at the sky, at least he will reach the roof top of the Empire State Building. Before reaching such great heights, he will face obstacles and challenges. The twice defeated Republican Party has already made its intentions clear. A despondent president learnt it hard way during the recent fiscal cliff crisis that bipartisanship won’t come on a platter. A study of the last two presidential election results showsthat the youth, the educated and the minoritiesare veering away from the rightwing Republican politics. In such circumstances, the Republicans with their focus on the next presidency will not mollycoddle a Democrat president. They will do their utmost to undermine the Obama presidency.
The Republican campaign for the 2016 White House is boosted by a sluggish economy with a huge deficit. Obama was optimistic when he stressed in his speech that the economy was on road to recovery.However, the International Monetary Fundpredicts that the US economy which grew by 2.3 percent in 2012 will see only a 2 per cent growth this year. To put the multi-trillion-dollar debt-ridden economy on the right track, Obama will have to take radical measures. Ending wars and cutting down on the defence expenditure could help him channel the money to infrastructure development and other projects that generate employment and stimulate growth.
He gave a hint of his economic vision – which critics have dubbed Obamanomics–at Monday’s ceremony which was attended by three-quarters of a million people and had a 17.8 million TV audience. Sounding like a socialist with market economic outlook, Obama said, “We believe that America’s prosperity must rest upon the broad shoulders of a rising middle class.”
Whether the middle class is rising is a big question, given the shocking statistics. In an economy that has seen the gap between the haves and have-nots ever widening, idealistic goals disappear in the face of the onslaught from the super rich – the so-called one percent, to use the language of the Wall Street protesters.
Writing some 11 years before the 2011 Wall Street protests, the World Socialist Website Review in an article put the statistics in perspective. The article said: “At the top of American society is a possessing class richer in terms of both of wealth and income, than any in history. The richest one per cent of American households has amassed more than $ 10 trillion in wealth – 10 million million dollars – about 40 per cent of the total national wealth. The combined net worth of these multimillionaires is greater than the total wealth of the bottom 95 per cent of the population.”
Such income inequality has only worsened over the years. When Obama took over office in 2009, 13.2 per cent of Americans lived in relative poverty. Today as he begins his second term, the US Census Bureau says more than 16 per cent of the population lives below poverty line.
One never knows at what poverty level socialist revolutions erupt in capitalist countries. Going by the rapid rate at which the income inequality widens, the time for the American spring won’t be that far off. 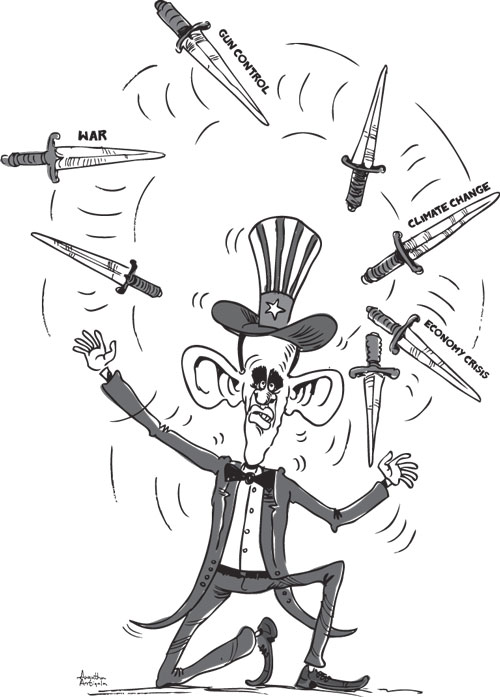 Besides dealing with the Republican rancour and the task of putting the economy on the right track, Obama also faces the challenge of meeting fire with fire in his confrontation with the powerful gun lobby. On Wednesday, he unveiled a plan to ban assault weapons and tightenregulations on gun sales in a move to curb gun violence like the Connecticut school massacre that shocked the world in December. The fact that such a plan comes in spite of the gun lobby’s blood-soaked billions in campaign funding indicates that Obama will not be tied down by any kind of lobby pressure.
On Monday, he also appeared firm on climate change. “We will respond to the threat of climate change, knowing that failure to do so would betray our children and future generations…
“Some may still deny the overwhelming judgment of science, but none can avoid the devastating impact of raging fires, and crippling drought, and more powerful storms,” Obama said, raising hopes that the US will not be a stumbling block in the way of a global treaty aimed at cutting down on the emission of carbon gases.
Whether he will put his words into action or he will cow down to the industrial lobby is too early to predict. President Bill Clinton in the last months of his second term vowed to ratify the Kyoto Protocol, but he failed in the face of pressure from the oil and industrial lobby. If Obama is serious about his commitment to deal with climate change, he must act now before he becomes a lame duck president – a process that begins at the end of the second year of a president’s second term.
If these are the major challenges on the domestic front, in foreign policy matters, Obama faces the challenge of making equally hard decisions. His choice of John Kerry as Secretary of State and Chuck Hagel as Defence Secretary is commendable. If the appointments are approved by the Senate, the second-term Obama policy will be one of restraint rather than gung-ho. Bashar al-Assad can be well assured that there won’t be US boots on the ground in Syria, as Obama is likely to continue the policy of leading from behind – a policy that was adopted during the Libyan crisis. Like in Libya, in Mali, too, the US is playing only a behind-the-scenes role by giving logistical and intelligence support to France which is fighting the ground war. The Obama administration will continue this policy even if Israel decides to trigger a war with Iran.In the meantime, the US is likely to impose stricter sanctions on Teheran to force the Islamic regime there toabandon its nuclear programme, but will not launch a war itself.
The leading-from-behind policy and the policy of not getting directly involved in new wars against sovereign nations, however, cannot be interpreted as any commitment on his part to make real the hopes of the Nobel committee that gave him the Peace Prize in 2009.
A part of the Nobel Committee’s citation reads as follows:
“Only very rarely has a person to the same extent as Obama captured the world’s attention and given its people hope for a better future. His diplomacy is founded in the concept that those who are to lead the world must do so on the basis of values and attitudes that are shared by the majority of the world’s population.’”
But those who heard him speak on Monday have doubts about his peace credentials, though he said “a decade of war is now ending”. He was referring to the US wars in Iraq, Afghanistan and elsewhere.  But in the same speech, he also said: “America will remain the anchor of strong alliances in every corner of the globe; and we will renew those institutions that extend our capacity to manage crisis abroad, for no one has a greater stake in a peaceful world than its most powerful nation.”
In other words, he is only underscoring a policy of military expansionism. The US military is making its presence felt in Africa in a big way, while Asia, especially the region incorporating the South China Sea and the East China Sea, remains its main focus. Addressing a London security forum last week, outgoing US Defence Secretary Leon Panetta urged NATO to join Washington’s strategic moves in the Asia-Pacific region, where it is facing the challenge of a militarily and economically rising China.
Seeking more political space for intervention, Obama in his speech said “We will support democracy from Asia to Africa, from the Americas to the Middle East, because our interests and our conscience compel us to act on behalf of those who long for freedom.”
US watchers know well how hollow these words are. Washington’s record shows that it tries to bring about regime change only in countries that refuse to bow to US dictates. If Obama is serious about what he says, then he must first start his democracy project in Saudi Arabia, Washington’s main ally in the Middle East, and then in Bahrain, home to the United States’ Fifth Fleet.
Notwithstanding these war credentials and expansionist designs, Obama could still emerge as a peacemaker if he helps the Palestinian people realise their dream of statehood. Like he dares to stare down the gun lobby, he must know to spurn the pressure from the Zionist lobby. Here lies Obama’sbiggest foreign policy challenge and an opportunity to uphold justice and play the role of an honest peace broker.
Order Gifts to Sri Lanka. See Kapruka's top selling online shopping categories such as Toys, Vegetables, Grocery, Flowers, Birthday Cakes, Fruits, Chocolates, Clothing and Electronics. Also see Kapruka's unique online services such as Sending Money,Online Books, Delivery Service, Food Delivery and over 700 top brands. Also get products from Amazon & Ebay via Kapruka Gloabal Shop Sri Lanka