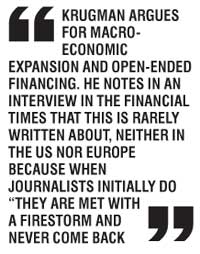 But the Germans are adamant. Having gone along with the European Central Bank’s commitment three weeks’ ago to act as a lender of last resort they are adding caveats. The ECB’s action was meant to hold down a country’s borrowing costs, especially for short-dated bonds. (Indeed the price of bonds fell for a couple of weeks.) But the Germans have diluted the offer by telling Spain it mustn’t ask for more help. Moreover, the Germans have also gone backwards on part of a deal on banking union with a single banking supervisor which would have shifted some of the burden of supporting crippled banks to the whole Euro-zone. Bond prices are now returning to their high levels and Spain remains in a bad way with massive youth unemployment, protests massing on the streets and its key province of Catalonia pushing for secession.
Ironically, the Germans are now feeling the effects of the crisis. Their own economy is slowing. It could even slip into negative growth if the crisis continues and the demand for German exports continues to fall. The greatest of all economists, Keynes, and his profound message is forgotten, not just by the Germans but by the British, the Dutch and Finland, the hardliners on cutting deficits.
Keynes wrote, “The boom, not the slump, is the time for austerity”. The Keynesian insight that government spending creates demand and thus growth opens up a way out of crisis is ignored. The rearmament of the US with its high spending saved America from the Great Depression. Likewise Hitler’s large expenditure on social welfare programmes and the building of motorways, followed later- yes later!- by rearmament, righted a Germany with its deeply depressed economy and high unemployment that brought Hitler to power. Even today the developed countries that have not purged themselves- Japan, Canada, Poland, Norway, Switzerland, Sweden, Finland and Australia- are the ones doing best. Sweden has just announced Keynesian-style increased expenditure for the coming year. 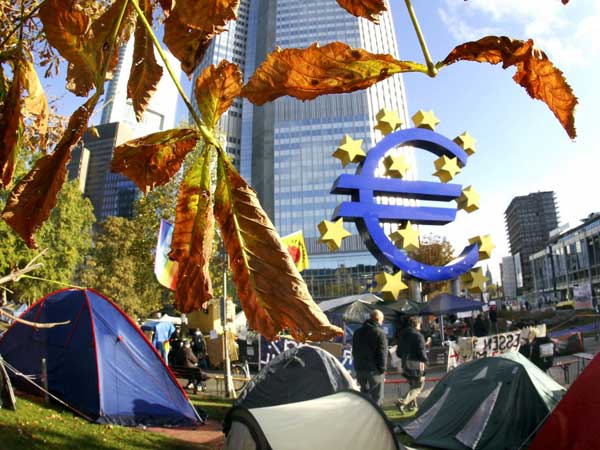 The trouble with Keynes is that his method is both counterintuitive and runs up against traditional notions of household thrift. It is not helped by the Germans’ determination to avoid mention of him, a refusal to treat his texts seriously, ignoring their own history and not absorbing the weekly International Herald Tribune columns by the Nobel economics prize winner, Paul Krugman, who argues more lucidly than anyone else for Keynesian solutions both in Europe and the US. His cause - and Obama’s cause   - is nearly obliterated at home by the conservative drum beat of the Republicans who want to see all social programmes savagely cut whilst maintaining tax cuts for the rich. But the great recession is the US’s and Europe’s main enemy not foreign countries.

Why don’t the beleaguered Europeans cut their defence budgets? Also why don’t they push up their retirement age sharply? In Sweden the prime minister is talking about raising it to 69 whereas in France President Francois Holland has just cut it back to 60.
Krugman argues for macro-economic expansion and open-ended financing. He notes in an interview in the Financial Times that this is rarely written about, neither in the US nor Europe because when journalists initially do “they are met with a firestorm and never come back. They run scared ever after.” Also Europe and the US are the prisoners of “group think”.
If borrowing costs were brought down [by implementing the ECB’s new policy without severe conditions], government spending increased and the debtor nations given, as Krugman writes, “the same kind of opportunity to export their way out of trouble that Germany itself received during the good years that is, create a boom in Germany that mirrors the boom in southern Europe between 1999 and 2007 - the problem could be solved. And yes, that would mean a temporary, but substantial, rise in German inflation”. (But for less time if the Europeans raised their retirement age and cut military budgets.) . Keynes and Krugman- Berlin, London and Washington must listen to them.