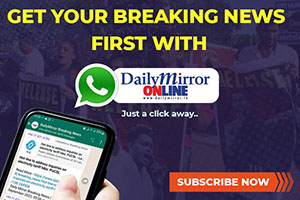 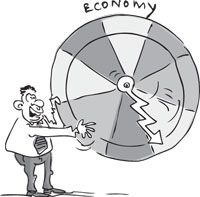 As for the notorious foundation stones, UNP Deputy Leader Sajith Premadasa also is making some serious allegations. He claimed that Housing Minister Wimal Weerawansa was colour washing or renovating housing schemes built by former President Ranasinghe Premadasa and replacing the foundation stones to claim they were built by Mr. Weerawansa. If Sajith Premadasa’s allegations are correct, then Minister Weerawansa is guilty of foundation fraud, and the President needs to reprimand him also – if he dares to. It was inspiring to hear the President warning local council politicians and officials that he would deal with them sternly if he came again and found them still bluffing or being involved in corruption, deception or mismanagement. We hope the President will also take a strong stand at Central Government level where many if not most ministers and top officials are alleged to be involved in corruption, bluff, blunder and the plunder of public wealth and resources. They continue to indulge in luxury or vulgarly-extravagant lifestyles with fleets of expensive vehicles, bungalows, other perks and privileges worth millions, while millions of people are struggling to find two square meals a day, and farmers are in mud holes with little or no drinking water and thousands of acres of their paddy or other crops have been destroyed by the drought. Just as the President got tough with local council politicians and officials, the people would also like to see him taking stern action against VIPs for the scandalous mess in the vital education sector and the blazing corruption in the Ceylon Petroleum Corporation. But to pacify the people and ease pressure, the CPC Board of Directors was asked to resign. Some heads merely rolled, but what about accountability? Who will repay the tens of millions of dollars in public funds lost in the fuel import frauds with a blacklisted company insisting it will continue supplies of sub-standard or any standard fuel.
Then what about the bluff and blunders by the highest officials in the Central Bank and the Treasury? High growth figures and per capita incomes are being manufactured and headlined in the state media while most economic analysts believe that Sri Lanka is surviving on heavy borrowings at commercial interest rates and borrowed time.
Order Gifts to Sri Lanka. See Kapruka's top selling online shopping categories such as Toys, Vegetables, Grocery, Flowers, Birthday Cakes, Fruits, Chocolates, Clothing and Electronics. Also see Kapruka's unique online services such as Money Remittence,News, Courier/Delivery, Food Delivery and over 700 top brands. Also get products from Amazon & Ebay via Kapruka Gloabal Shop into Sri Lanka.