A A A
This crime against humanity apart, the World War II foe is today Japan’s main ally, protector and biggest trade partner. Japan owes its post-war economic recovery to the United States and the two countries are also bound together by a defence treaty.
Constitutionally prohibited from maintaining a military force, Japan has only a Self-Defence Force and, therefore, depends heavily on the defence treaty with the US to defend it against outside aggression. Never has this treaty become so strategically important to Japan since the end of World War II, as it has today as war clouds gather over the East China Sea. 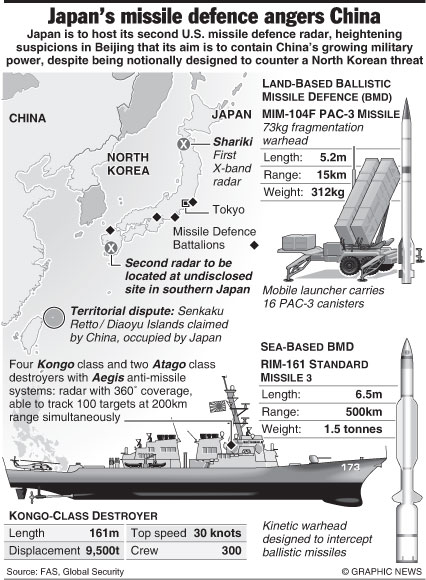 On the other hand, the Chinese, despite their strong economic and trade ties with Japan, have not forgotten the crimes of the Japanese imperial forces or the humiliation they underwent during the Japanese occupation of Manchuria. The old wounds in the Chinese psyche are now being ripped open in the face of rising tensions with Japan over a chain of islands in the East China Sea.
Across China, tens of thousands of people protested this week against what they called a provocative move by Japan to claim ownership of the islands which the Chinese call the Diaoyus and the Japanese the Senkakus.
The dispute over the uninhabited but oil-and-gas-rich islands took a turn for the worse two weeks ago when the Japanese government announced that it had bought the islands from a Japanese citizen who held its title deed.
Since Japan’s defeat in 1945, the United States had occupied the islands. The US in 1972 handed over the islands to Japan amidst protests not only from China but also from Taiwan, which calls the island chain Tiaoyutai. Taiwan broke away from China following the 1949 Communist revolution on the mainland, with the ousted nationalist leaders forming a government there. The disputed islands are geographically closer to Taiwan than to China or Japan. However, China claims that the islands belong to it because  historical documents show that they had appeared on the maps of China since the Ming Dynasty (1368-1644).
Japanese Prime Minister Yoshihiko Noda’s announcement of the purchase of the islands came days before the Chinese on Tuesday marked the 1931 Japanese invasion of Manchuria. It provided more reasons for the Chinese to mark the anniversary with added anger. China described the purchase of the islands as unlawful and warned that it would damage economic and trade relations.
China has been a Communist nation since 1949. The rigid control of all spheres of society by the Communist Party since the revolution had not only led to poverty and destitution but also contributed to accumulation of frustration with no outlet to vent it. The 1989 Tiananmen Square uprising which China’s communist leaders crushed ruthlessly was a manifestation of this frustration.
The post-Tiananmen story of China was different. Communist Party leader Deng Xiaoping led the country through economic reforms that set the platform for China to become the giant it is today. The success of the Deng reforms has created more than one million dollar-millionaires in a country of more than 1.5 billion people.
The Chinese communist leaders are, however, not unmindful of the frustration that builds up in society. The new socialist market economy has given rise to new problems such as breakdown in family structure and youth unrest. The current global recession and the slowdown of the Chinese economy have aggravated the problems. 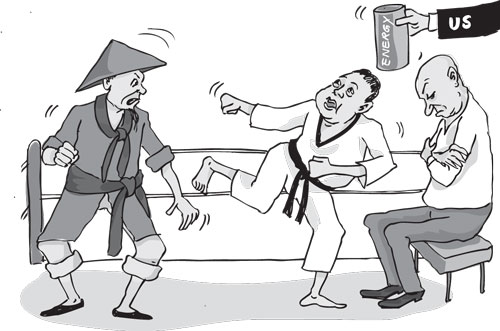 With Tiananmen Square type protests out of the question, there needs to be an outlet to release the built-up frustration. Nationalism offers such an outlet. Thus it came as little surprise when the authorities turned a blind eye on the anti-Japan protests and the police took only half-hearted measures to control the protesters as they attacked Japanese business interests and threatened to storm the Japanese embassy in Beijing on Tuesday. 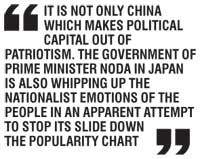 “We believe we need to declare war on them because the Japanese devils are too evil. Down with little Japan,” Wang Guoming, a retired soldier, told the Associated Press. He said he had travelled 600 kilometres to take part in the protest outside the Japanese embassy in Beijing so that he could vent his frustration.
The anger was so intense that Chinese officials warned the people not to use Japanese made vehicles or goods to avoid being attacked by mobs. The government media also devoted space and time to whip up patriotic fervour. An officer of China’s nuclear missile forces wrote that if war broke out, Chinese missiles would devastate the entire Japanese archipelago.
China also conducted military exercises in the East China Sea while it allowed some 700 boats to go and fish in the waters off the disputed islands. A dozen Chinese maritime police vessels gave protection to these fishing boats.
Also attacked during the protests this week was the US ambassador’s vehicle in Beijing. The ambassador was unharmed. The crowd taunted him saying, “Down with US imperialism. Pay us back our money!” They were referring to the more than one trillion dollars of US government debt that China holds.
The protesters claimed that Japan and other countries with which China has territorial disputes became emboldened because the US had boosted its military presence in the region.
“Wherever America goes, there will be turbulence. Their crimes are no less than Japan,” retired Beijing teacher Sui Xueyan told AP.
The Chinese leaders have learnt that nationalism is a useful political weapon to keep the people’s attention away from burning socio-economic issues. But such a strategy has little long-term effect. Soon the politically matured masses will realise that the rulers are using their patriotism to cover up their failures. In the United States, President George W. Bush and his war party invoked patriotism to invade Iraq. But the Republican Party’s war slogans and patriotic politics failed at the 2008 elections where President Barack Obama who campaigned on an anti-war platform won.

It is not only China which makes political capital out of patriotism. The government of Prime Minister Noda in Japan is also whipping up the nationalist emotions of the people in an apparent attempt to stop its slide down the popularity chart. The Noda government has earned public anger for raising taxes and restarting the nuclear power industry that was closed down after last year’s catastrophe following the tsunami.
Japan’s media, meanwhile, call for the deployment of Self-Defence Forces if the coastguards are not strong enough to prevent violations of Japan’s territorial waters by Chinese boats. Recently a neo-nationalist in Japan set sail from Tokyo to the disputed island and raised a small Japanese flag there. When he returned to Tokyo, governor Shintaro Ishihara called him an ‘idiot’. The blackguarding was not for the provocation, but for his failure to raise a huge flag instead.
Looking at the rising tension between the two Asian economic giants from the stand point of only domestic political compulsions will be an exercise in underestimating the gravity of the crisis. The dispute is serious enough to spark a major war involving the entire region or the entire world.
It will drag the United States, which is legally bound to protect Japan, including Senkaku –Diaoyu – into the war. So will Australia, New Zealand, the Philippines, Vietnam, South and North Korea and Taiwan be dragged into the war.
It is in this light that the visit of the US Defence Secretary Leon Panetta to Tokyo and Beijing this week assumes significance. He met China’s Defence Minister Liang Guanglie, who visited Sri Lanka last month, and leader in waiting Xi Jinping.
The two Chinese leaders in separate meetings told Panetta that they hoped the US would maintain its neutrality in the dispute.
The US has called for calm and restraints on all sides saying it was “in everybody’s interest” for Japan and China to “avoid further escalation”.
But at the same time, the US has said it will be obliged to militarily assist Japan if a conflict breaks out. Japan and the US agreed this week to deploy Ospreys –hybrid helicopter cum fighter jets – in Japan’s Okinawa region that overlooks the disputed islands. The US has also agreed to install a second anti-missile defence shield in Japan.
As the tension fuelled by nationalistic anger rises, Japan and China have avoided going to the International Court of Justice which has ruled on many a dispute of similar nature.
Another suggestion for the peaceful resolution of the conflict is that the two countries agree to joint sovereignty over the islands and share their resources. The two countries had agreed to that, but the agreement fell apart after Japan last year arrested a Chinese vessel and its captain for violating what it called its territorial waters near the disputed islands. This prompted China also to assert its sovereignty over the islands.
Adding to China’s worries is the military presence of the United States in countries surrounding it and fresh moves by Washington to beef up its military strength in the Asia Pacific region. The US could play a contributory role in reducing the tension by scaling down its military presence and thus averting a devastating war that the world can hardly afford.