A A A
Now a few recent words from Jack Matlock who was US Ambassador to Moscow under Presidents Reagan and Bush senior:
“The Ukraine crisis is a product, in large part, of the policy of indefinite expansion of NATO to the East. If there had been no possibility of Ukraine ever becoming part of NATO and therefore Sevastopol (the ex-Soviet naval port in Crimea) becoming a NATO base, Russia would not have invaded Crimea.”
He goes on to say: “Americans have lived for nearly two centuries with the Monroe Doctrine [which forbids non-Americans to seize land or intervene in Latin America]. Why don’t we understand that other countries are sensitive about military bases from potential rivals not only coming up to their borders, but taking land which historically they have considered theirs. These are extremely emotional issues -- issues that are made to order for any authoritarian leader who wants to strengthen his or her rule”. In the current issue of Foreign Affairs, Alexander Lukin, Vice-President of the Diplomatic Academy of the Russian Ministry of Foreign Affairs, adds a point: “It was only a matter of time before Russia finally reacted to Western encirclement”.
Matlock’s final point is that, “You have almost a clique in Washington that just can’t look at any atrocity in the world without wanting the US to get involved militarily.” [Despite Iraq and Libya which are falling to pieces, perhaps to be followed by Afghanistan.]
Matlock was the top Soviet expert in the Reagan Administration before he became ambassador. His great predecessor in this role, George Kennan, went to his grave warning that an expansion of NATO would be totally counterproductive. 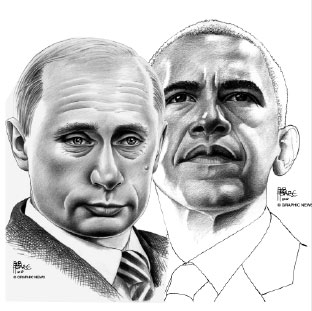 Increasingly forgotten are the efforts made by Gorbachev and then the first President of Russia, Boris Yeltsin, to cement a close relationship with the West. The West at the G-7 summit in London in 1990 refused to respond to Gorbachev’s request for economic aid, although that could have kept him in the saddle, removing many future headaches for the West, indeed the world. There would have been no Chechnyan war, no Ukrainian imbroglio and a lot more nuclear disarmament, even down to zero which Reagan and Gorbachev tried to consummate at their summit in Reykjavik. Later when Yeltsin appealed for help, Washington sent to Moscow a delegation to insist that Russia pay down its debts and offered not even a single dollar to re-float the Russian economy.
The US  and the EU had a zero-sum mind-set left over from the Cold War which they believed, erroneously, their policies had won.
The NATO issue is the top one for Moscow. On its heels is Russia’s preoccupation with the Russian language issue. Again the leaders and legislators of Ukraine need to make it clear that Russian is an equal language with Ukrainian. Moreover the West needs to bring pressure on those former (very small and beholden to the West) countries where the Russian language users are being made into second class citizens. More than 6% of the Estonian population and 12% of the population in Latvia, most of them ethnic Russians, do not have the full rights and privileges of citizenship. They cannot vote in national elections, enrol in Russian schools or for the most part, access Russian media.
The West treats President Vladimir Putin as an outlaw. Policy makers see, to quote Jesus, the “speck” in his eye but “not the beam in their own”- and this was the viewpoint even before the shooting down of the Malaysian Airlines flight in which Putin is said to be implicated. The US and EU made it clear, in effect, to the then president of Ukraine, Viktor Yanukovych that the arrangement he and most Ukrainian-speaking citizens wanted, a trade deal with the EU could only come about if Ukraine cut off its negotiations about joining Putin’s Eurasian Economic Union. Yet with skillful diplomacy Ukraine could have had both -- the EU is now negotiating a free trade area with the US.
Is one surprised that Putin probably says to himself, “The West be damned”?
Order Gifts to Sri Lanka. See Kapruka's top selling online shopping categories such as Toys, Vegetables, Grocery, Flowers, Birthday Cakes, Fruits, Chocolates, Clothing and Electronics. Also see Kapruka's unique online services such as Sending Money,Online Books, Delivery Service, Food Delivery and over 700 top brands. Also get products from Amazon & Ebay via Kapruka Gloabal Shop Sri Lanka