A A A
Take for instance, the targeted assassinations or the extrajudicial killings.
When Israel started its targeted killings openly in the 1990s, taking on Palestinian freedom fighters one by one, there was only some half-hearted condemnation from the United States and its European allies, the so-called good guys in international politics. Even such half-hearted condemnations often sympathised with Israel and recognised Israel’s right to defend itself.
But with Washington launching its war on terror in 2001, such extrajudicial killings became part of the US military strategy. In the post-9/11 era, the US and Israel behave in such a way as though extrajudicial killings have become an accepted norm under international law.
Then take the attacks on journalists. According to customary international law, civilian journalists engaged in professional missions in areas of armed conflict must be respected and protected as long as they are not taking a direct part in hostilities.
According to the Additional Protocol I of the Geneva Conventions and Article 8(2)(b)(i) of the Rome Statute of the International Criminal Court, journalists, as civilians, and their crew must under no circumstances be the object of a direct attack. These documents also say a deliberate attack causing the death or injury of a journalist would constitute a war crime.

During the Yugoslav war in the 1999, NATO forces bombed the Belgrade headquarters of the Radio Television of Serbia. Some 16 employees died. It was a war crime, but the International Criminal Tribunal of the Former Yugoslavia did not think so. In a shocking statement, the tribunal justified the attack and thus put journalists doing their job of reporting the truth from the danger zone on the firing line to be killed by the good guys – often the victorious forces, in today’s context the Americans, the Israelis and the West. 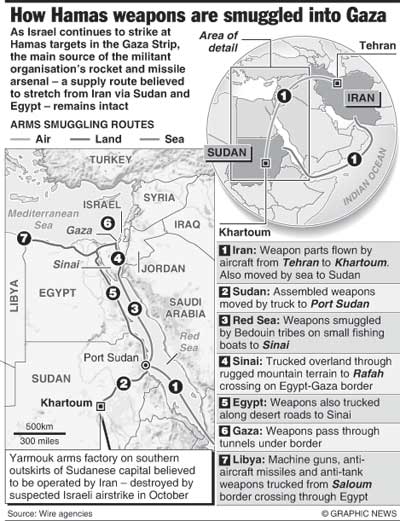 The attacks on journalists continued. The US bombed al-Jazeera offices -- first in Afghanistan and then in Iraq. The then US President George W. Bush and the then British Prime Minister Tony Blair discussed even an attack on al-Jazeera headquarters in Qatar. Journalists were taken prisoner in Afghanistan and sent to the United States’ Gulag-like prisons in Guantanamo Bay.

And this week, Israel showed it was no better when it came to attacking journalists. Apart from killing the child of a BBC photojournalist in Gaza, Israel extensively bombed a building used by the Gaza-based al-Aqsa television channel and several foreign journalists who had come to cover the conflict. These foreign journalists erroneously believed that Israel understood international law that protects journalists. Demonstrating that it cared no two hoots about international law on protecting journalists, Israel attacked the building again the following day.
Then take the law of proportionality. The UN prescribes it for its members with the aim of containing conflict. But it appears such rules based on the UN Charter, the Geneva Conventions and the Rome Statute are meant only for uncivilised nations. Civilised nations like the US and Israel follow to the letter the charter’s guidelines on the law of proportionality. The United States’ massive fire power unleashed on civilian centres in Iraq during the ‘Shock and Awe’ in 2003 was perhaps necessary because Saddam Hussein’s non-existent weapons of mass destruction were so dangerous and so powerful that they made the Bushes and Blairs to shiver and pee in their pants. Such mass-scale civilian killings drew little condemnation from the United Nations or the so-called human rights community. Their silence only gave some legal effect to an illegal act; after all civilised nations like the US could do no wrong.
Taking a cue from the US, Israel during the previous attack on the Gaza Strip in 2008, poured its massive fire power on Gaza civilian targets, killing some 1,500 people, most of whom were children. A United Nations report after a probe by Richard Goldstone said Israel committed war crimes including dropping banned white phosphorous bombs on civilian targets and on the UN compound where thousands of civilians had found refuge. But later under heavy US pressure, Goldstone, who also faced the threat of being ostracised by fellow Jews, retracted his report -- like the Indian umpire who ruled the Indian batsman out and then used the index finger which he raised to indicate the dismissal to scratch his head to say the batsman was not out.
Such is the collaboration between the partners in crime.

But the political landscape in the Middle East is changing. So is the way the American people look at their country’s military involvement in the Middle East and blind support to Israel. Every year, nuclear-armed Israel, the world’s eighth military power, receives four billion dollars in US taxpayers’ money as military and economic aid. In return the Israeli-backed Jewish lobby funds the election campaign of presidents and powerful congressmen and women representing the Democratic Party and the Republican Party.
But President Barack Obama and other politicians pandering to the whims and fancies of the Israeli lobby might do well to know the changing scenario from a CNN poll published this week in the wake of the Gaza conflict. The poll showed that only “four in ten Democrats think the Israeli actions in Gaza are justified.”
In other words, 60 per cent of the Americans who voted for Obama at the November 7 presidential election think Israel was in the wrong. According to the poll, some 74 per cent of the Republicans sided with Israel. Well, it is not surprising when the Zionists control and dominate the US media and produce bias journalism, projecting Israel as the only true democracy in the Middle East and covering up or underreporting its sins such as the illegal occupation, disproportionate use of fire power on civilian targets and the apartheid policies that deny the Palestinian people their right to return.
The bias in the corporate US media has, however, brought about a positive development in the media scene – the rise of left-oriented web media, which give the news that the rich and the powerful in the US do not want the masses – the 99 per cent – to know.
Positive change has also happened in the Middle East. The latest Gaza conflict was a test that proved that the new democracies that emerged from the Arab Spring were not fakes.
Winning the accolade of the Arab street was President Muhammad Mursi of Egypt. Unlike his predecessor and US puppet Hosni Mubarak, Mursi not only described Israel’s attack on Gaza as an aggression but also sent his prime minister, Hisham Kandil, to Gaza City to show Egypt’s solidarity with Hamas, which was an offshoot of the Egyptian Muslim Brotherhood, even as Israel bombarded the Palestinian civilian areas. 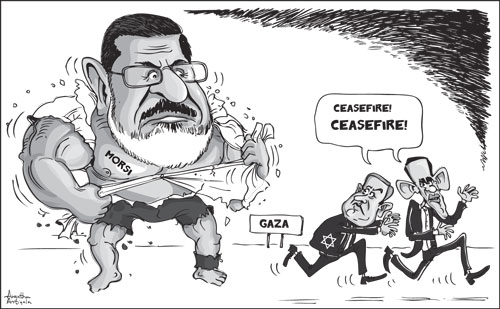 Soon after Kandil’s visit, foreign minister Rafik Abdesslem of Tunisia, where the Arab Spring originated, also made a visit to Gaza while Prime Minister Recep Tayyip Erdogan of Turkey, a key US ally, condemned the Israeli bombardment as an act of terrorism.
Also visiting Gaza was a group including representatives from Lebanon, Egypt, Iraq, Morocco, Saudi Arabia, Sudan, Tunisia, Turkey, and the foreign minister of the West Bank-based Palestinian Authority. Iran as usual remains a staunch ally of Hamas though western powers accused it of supplying advanced rockets some of which could not be intercepted by Israel’s so-called Iron-Dome.
No such Arab solidarity was evident when the Palestinians came under attack in 2008. Most Arab leaders gave Israel their nod and turned the other way while more than one thousands civilians died in the month-long attack.
This time around, the Arab Spring leaders’ tough resolve to stand by the besieged Palestinian people, despite the risk of losing US aid, compelled the Obama administration to intensify efforts and send Secretary of State Hillary Clinton to Israel and Egypt to bring about a ceasefire. The US’s biggest worry was a possible region-wide war if Israel were to launch the ground invasion which it was threatening to unleash on Gaza.
The Gaza conflict that ended on Wednesday with the Egyptian-brokered ceasefire showed the Americans and the Israelis the new reality of the Middle East – the power of the Arab Spring, the power of the people. Yet many are the places that the Arab Spring has still not visited. Among them are the oil-rich Arab Gulf states, including Saudi Arabia. The Saudi rulers must free themselves from their blind obedience to the United States and reflect the voice of the people at least in their foreign policy decisions.
See Kapruka's top selling online shopping categories such as Toys, Grocery, Flowers, Birthday Cakes, Fruits, Chocolates, Clothing and Electronics. Also see Kapruka's unique online services such as Money Remittence,News, Courier/Delivery, Food Delivery and over 700 top brands. Also get products from Amazon & Ebay via Kapruka Gloabal Shop into Sri Lanka.