A A A
To start at the beginning is a good place to start, and the Government needs to be commended for taking a major initiative to revive the local fresh milk industry by importing thousands of hybrid cows. The United Bhikkhu Front, however has accused Government leaders of behaving like buffaloes in this transaction. It charged that, like in most cases, some politicians and officials were making tens of millions rupees on this deal.
Till 1977 most Sri Lankans enjoyed fresh milk every day either at home or at hundreds of milk bars throughout the country, and the milk man was a familiar figure in the city and suburbs, while most villagers produced their own fresh milk. But gradually and in a subtle way trans-national companies and their agents here milked the fresh milk industry dry. Simultaneously they carried out powerful propaganda campaigns to popularise their imported powdered milk. They even used various methods to persuade dairy farmers to give up their business. The cows were bought wholesale for huge prices, and some of the dairy farmers were even offered well-paid jobs while the Government acted like a buffalo and allowed the fresh milk industry to be marginalised and undermined. 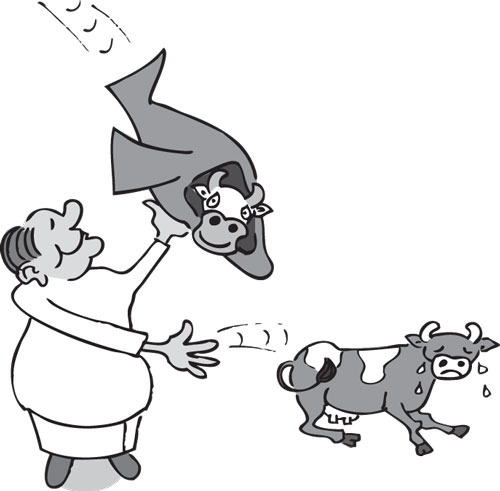 The TNCs and their agents also used sophisticated methods to draw young mothers away from the precious and priceless breast milk and turn to the easier way of bottle feeding after a few months of the birth of the child. When we hear that heart-stirring song about how the mother turns her own blood into milk to give the child a loving and solid foundation, we are heart-broken that this unique breast-feeding link between the mother and the child often lasts only for about two months instead of two years. Now we see milk and honey promotional campaigns with claims that are not only questionable but sometimes even dangerous. Unfortunately even film stars and cricket stars sell themselves for these promotional campaigns.
The Government’s newspaper and electronic media networks which have been used in recent years for the crudest and most blatant propaganda campaigns could play a positive and powerful role in the new mission to revive the fresh milk industry. They could educate the people on the wonderful nutritional value of fresh milk which could be obtained at a low cost. The farmers who get back to the dairy milk industry also need to be given various subsidies and facilities so that there will be sustainable growth in the fresh milk industry. A target of producing about 75% of our milk requirements locally by 2020 could be set and hopefully after that ours will be a land following with milk.
Order Gifts to Sri Lanka. See Kapruka's top selling online shopping categories such as Toys, Vegetables, Grocery, Flowers, Birthday Cakes, Fruits, Chocolates, Clothing and Electronics. Also see Kapruka's unique online services such as Sending Money,Online Books, Delivery Service, Food Delivery and over 700 top brands. Also get products from Amazon & Ebay via Kapruka Gloabal Shop Sri Lanka