A A A
Saudi Arabia, Qatar, Turkey and to some extent Jordan, are working hand in hand with the United States, France, Germany and Israel to topple the Assad regime. They have one objective in common: They want to check Iran, a rising regional power. Iran’s nuclear programme and achievements in weapons technology are a major concern for these countries. Iran, Syria and Lebanon’s Hezbollah form an anti-US, anti-Israel alliance in the Middle East. If the Assad regime falls it will deal a mighty blow to Iran and allow the US and Israel to militarily dominate the region.
“It was all about Iran,” said Vitaly I. Churkin, Russia’s Permanent Representative at the United Nations, addressing journalists after his country vetoed a UN Security Council resolution against Syria last Thursday. 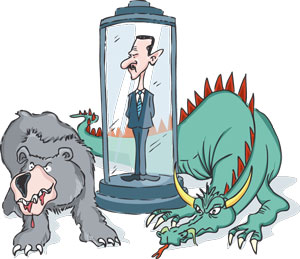 When Russia and China used their veto to defeat the draft resolution presented by Britain, they sent a strong message to the United States and its allies in the West, the Middle East and East Asia. The message: Russia and China are politically better equipped today to counter Western threats and their secret and not-so-secret designs. In the past, the West, especially the United States, had politically blackmailed a less-strong Russia and an equally less-strong China to get their support for resolutions against Saddam Hussein’s Iraq. In the recent past, the US had invoked the fears of an oil crisis and the possibility of internationalisation of the internal crises in Russia and China – such as the crises in Chechnya, Dagestan, Ingushetia, Tibet and Xinjiang -- as threats to get their support for resolutions against Iran.
The last time, Russia and China buckled under such US pressure was when the West wanted to impose a no-fly zone in Libya through a UN resolution in March 2011. But little did Russia and China know at that time that the West would give a warped interpretation to the resolution and use its mighty air power to bring about a regime change in Libya.
Smarting over the West’s breach of trust or political deception in the Libyan crisis, Russia and China, which have now virtually brought their internal crises under control, are now more circumspect when they are called upon to vote for West-backed resolutions. In fact, Russia is acting like the Soviet Union did in the past. One wonders whether the United Nations has returned to the days of the cold war during which each superpower used its veto liberally to block resolutions of the other.
The double veto by Russia and China for the third time in support of the Assad regime has virtually closed the door on western moves aimed at taking military action against Syria through a UN resolution. The West may still explore, however, other avenues to pave the way for external military intervention in Syria. It is in this context that Syria’s chemical weapons have, all of a sudden, become a major topic in the western corporate media. Should one be reminded that the United States justified its illegal invasion of Iraq on the basis that Baghdad possessed weapons of mass destruction?
Addressing war veterans in Nevada, President Barack Obama on Monday played the same card that President George W. Bush played in preparing the US public for the Iraq war. He talked about a Syria without Assad and warned Damascus not to make the “tragic mistake” of using chemical weapons.
Also echoing similar concerns are Israel and Britain. Israel has claimed that Syria’s chemical weapons have either reached or would reach Hezbollah, the pro-Iranian Shiite militant group which successfully withstood a 34-day Israeli onslaught on southern Lebanon in 2006. 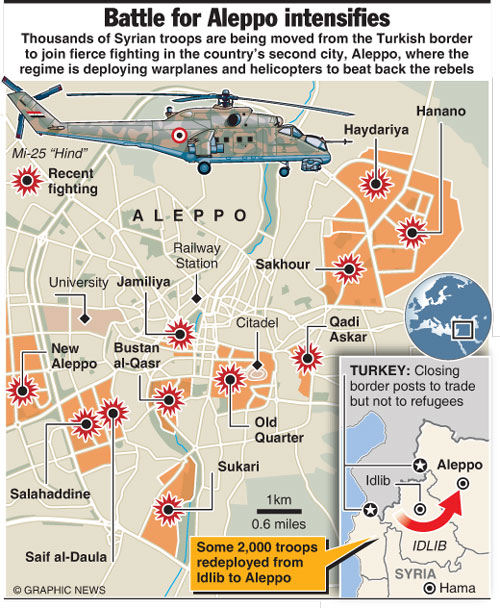 However, Syria made an attempt to dampen western moves to make chemical weapons an excuse for invasion. Syrian foreign ministry spokesman Jihad Makdissi said the Assad regime would not use chemical or biological weapons to fight the Syrian opposition. “I repeat, (the chemical weapons) will never be used… no matter what the developments inside Syria… All of these types of weapons are in storage and under security and the direct supervision of the Syrian armed forces and will never be used unless Syria is exposed to external aggression,” he said.
Last week, Hezbollah leader Hassan Nasrallah in a public speech claimed that the militant group possessed some surprises for Israel. Whether chemical weapons are among these surprises, one never knows. He also said the West and Israel were determined to reduce the Syrian army, a fighting army capable of meeting any external threat, to a mere police force just as they had done to other Middle Eastern armies.
With Russia and China blocking the path to war through the Security Council, it may not be a surprise if the US and its western allies go after Syria’s chemical weapons to find an excuse for intervention.
In the meantime, the western nations and their allies in the region have increased their support for the Syrian rebels. The recent military successes of the Syrian rebels indicate that they are receiving intelligence, hi-tech weapons, communications equipment and money from the West, Saudi Arabia, Qatar and Turkey. There are also reports that Islamic fighters from the other Middle Eastern countries, especially those who call themselves the Wahhabi and Salafis, have joined the Syrian rebels. The irony is that these foreign fighters are also sympathetic towards al-Qaeda which the US is fighting in Afghanistan, Iraq and Yemen. But what has joined them together is their determination to crush the Shiite Iran. The rebels struck last week by killing four top Syrian officials, including the defence minister and the brother-in-law of President Assad, in a huge bomb blast at a government nerve centre. They also intensified attacks on Damascus and captured military posts on Syria’s borders with Iraq and Turkey. When the Syrian soldiers repelled the rebel attack on Damascus and recaptured the border posts, the rebels struck Aleppo, Syria’s second most important city after Damascus, in a deliberate attempt to spread the Syrian army thin so that they could become easy prey.
Meanwhile, the war-hungry corporate media in the west try to portray the latest defection by a husband-and-wife diplomatic couple as a sign that the regime is crumbling. 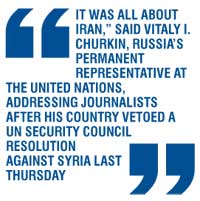 But far from it, Assad appears to be strong. Unlike in Egypt, Tunisia and Libya, anti-regime sentiments are not widespread in Syria. Even attempts by Saudi Arabia to play the sectarian card by whipping up anti-Shiite emotions among Syria’s majority Sunni population have not brought about the desired results. This is because a substantial segment of the Syrian Sunnis is secular and wary of the Islamists, although they may resent the minority Alavites’ control of the government.
As the conflict escalates, western powers appear to be uninterested in a peaceful solution, making Kofi Annan, the joint special envoy of the UN and the Arab League, wander in the wilderness with his six-point plan. The US, France, Britain and Germany in their post-vote speeches after the anti-Syria resolution was vetoed by Russia and China made no secret of their intentions that they wanted Assad ousted.
A solution is still not far away, however. It can be found, but only if Iran is included in the Annan peace process. But the US and its western allies are opposing any role for Iran, although Annan himself has said clearly that Teheran should be part of the international process. Both Russia and China also endorse his views. If no peaceful solution is found, the Syrian crisis could spark a region-wide war. And that would be a global-scale disaster. Already some 19,000 people have died in the war and the death toll is increasing.
Order Gifts to Sri Lanka. See Kapruka's top selling online shopping categories such as Toys, Vegetables, Grocery, Flowers, Birthday Cakes, Fruits, Chocolates, Clothing and Electronics. Also see Kapruka's unique online services such as Sending Money,Online Books, Delivery Service, Food Delivery and over 700 top brands. Also get products from Amazon & Ebay via Kapruka Gloabal Shop Sri Lanka