A A A
The jubilation was over the good news that Curiosity had landed safely in a crater on the surface of Mars after what the NASA scientists had described as “seven minutes of terror’ during which the fate of the mission hung in the balance.
Indeed, it is another giant stride for mankind, to borrow the words that Neil Armstrong uttered as he set foot on the Moon and became the first man on it.
The rest of the world also joined in the jubilation on Monday as if the Earth had won the Gold medal in an inter-planetary Olympic event. The United States became part of us. The differences were forgotten. The mission is for humanity as a small chip fixed into Curiosity symbolises. It carries the names of 1.2 million earthlings. The names were collected from 2009 to 2011 as part of a move to generate worldwide public interest in the mission.
Behind the jubilation lies a political message: The United States is capable of reaching the zenith with its soft power, which is as powerful as its destructive hard power, if not more. 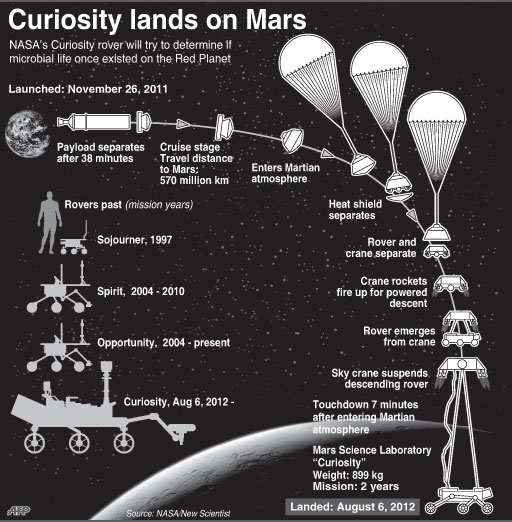 The term soft power was coined by noted foreign policy scholar and analyst Joseph Nye, who once served as Assistant Secretary of Defence in the Bill Clinton administration.
Nye describes soft power as “the ability to get what you want through attraction rather than through coercion.”
Sadly, though, US policymakers in recent decades and years, have put more emphasis on hard power than on soft power, little realising that they were only tarnishing their country’s image. The United States was once seen as the champion of human rights and democracy. Today, it has lost its moral standing because of numerous human rights violations it had committed and justified in the name of fighting a war on terror. Besides, it has violated international laws, norms and customs and veered away from civilised behaviour in a mad drive to control global resources and militarily dominate the world — a drive fuelled by greedy capitalism.
A number of countries which were accused by the US of violating human rights now have the gumption to tell the accuser, “physician, heal thyself”.
The US militaristic policy may bring short-term benefits but in the long-run it contributes to global anarchy.
Even Nye has lamented that the US soft power has taken a beating following the 9/11 attacks.
The disinformation campaign carried out with the support of the embedded US media, the lies and deception surrounding the wars in Afghanistan and Iraq, and the looming conflict over Iran’s nuclear programme have virtually erased any memory of the soft power the US had wielded prior to 9/11. 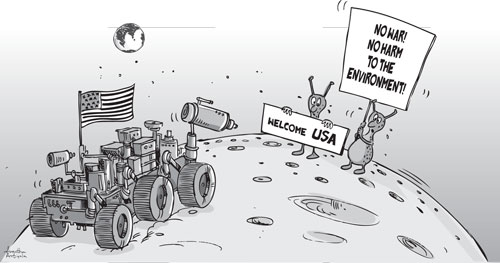 Recalling the soft power the US had wielded, Steve Jones, a professor of history at Southwestern Adventist University and foreign policy and military history specialist, wrote in an article that the Marshall Plan was a classic example of US soft power.
The Marshall Plan, under which the US gave billions of dollars in aid for the reconstruction of Western Europe after Word War II, included humanitarian aid, such as food and medical care; expert advice on rebuilding destroyed infrastructures, such as transportation and communications networks and public utilities; and outright monetary grants.
Prof. Jones also sees educational exchange programmes, such as President Obama’s 100,000-strong initiative with China, as having an element of soft power. “So are all variety of disaster assistance programmes, such as flood control in Pakistan; earthquake relief in Japan and Haiti; tsunami relief in Japan and India; and famine relief in the Horn of Africa.”
However, the billions of dollars which the US pumped in for the Marshall Plan and similar programmes in the past did not spring from US altruism. Often, there is an ulterior motive behind the free dollars. In the case of the Marshall Plan, it was aimed at halting the spread of Communism in Western Europe and to assert the post-World War II global leadership of the US.
Even Prof Jones admits that one of the main objectives of foreign policy is to get other nations to adopt your policy goals as their own. “Soft power programmes can often influence that without the expense -- in people, equipment, and munitions -- and animosity that military power can create,” he says.
The bottom line is that soft power has a self-serving agenda. Take for instance the setting up of Africom — the US military command for Africa. It was set up in 2007 or war president George Bush’s last year in the White House to bring mineral rich Africa under US command. The then Defence Secretary Robert Gates told the US Senate Armed Services Committee that the main purposes of the Africa Command Center would be to fight the war on terror, cooperation, provide humanitarian aid, building partnership capability, oversee security, defence support to non-military missions and, if directed, military training operations designed to help local governments.”
The mention of humanitarian aid and building partnership capability could give the impression that the US was reaching out to Africa with its soft power. But the reality is that behind this soft power lies the dangerous face of hard power. One can discern it in the Africom mission statement. It reads: “Africa Command protects and defends the national security interests of the United States by strengthening the defence capabilities of African states and regional organisations and, when directed, conducts military operations, in order to deter and defeat transnational threats and to provide a security environment conducive to good governance and development.”

No wonder, the US had to set up its Africom headquarters in Stuttgart, Germany when it found almost all African countries were reluctant to host it. Libya’s Muammar Gaddafi, who opposed the Africom tooth and nail and campaigned against it was last year violently removed from office in a US-led rebellion.
Given this soft power façade, one wonders whether the mission to Mars also has a hidden agenda. Theories and interpretations about the US agenda apart, the Mars landing brings to mind the theme of the 2009 blockbuster “Avatar”. James Cameron’s movie was different from the usual Hollywood hogwash where the US hero is projected as highly disciplined and on moral high ground — one who fights for justice or saves the victims from third world terrorists, usually Communist rebels in the past and Islamists nowadays. Avatar was not only a critical portrayal of corporate America, but it also evokes a striking parallel between its plot and Bush’s war on terror, a euphemism for a sinister campaign to wrest control of world resources by military means or by a vulgar display of hard power. In Avatar, the war was for ‘unobtainium’ a rare mineral in a distant planet called Pandora because it was the answer to the Earth’s energy crisis. The greedy corporate America goes to Pandora, sets up base and launches a war against the native Na’vi people to get unobtainium — and yes, it unleashes “shock and awe” on the innocent inhabitants. Since a large deposit of the mineral lies at a site where the planet’s ‘home tree’ is, the corporation decides to bomb it, knowing well that the Na’vi people will die if the tree is destroyed.
The hero, a paraplegic marine hired by Corporate America to become a Na’vi avatar and double agent defects to the Na’vi side to lead their fight against the resource robbers after he realises their plight.
The Canadian born director told the media at the premier of the movie in 2009 that the Americans had a “moral responsibility to understand the impact that their country’s recent military campaigns had had”.
He said: “We went down a path that cost several hundreds of thousands of Iraqi lives. I don’t think the American people even know why it was done. So it’s all about opening your eyes.”
Surely, if the Martians had any inkling of the recent US wars based on lies and deception, they would hold placards and shout “Yankee go home.”
Order Gifts to Sri Lanka. See Kapruka's top selling online shopping categories such as Toys, Vegetables, Grocery, Flowers, Birthday Cakes, Fruits, Chocolates, Clothing and Electronics. Also see Kapruka's unique online services such as Sending Money,Online Books, Delivery Service, Food Delivery and over 700 top brands. Also get products from Amazon & Ebay via Kapruka Gloabal Shop Sri Lanka