A A A
As word leaders deliver moving eulogies and wax eloquent on the virtues of Nelson Mandela, some inadvertently desecrate the legendary statesman who stood for justice. This is because, apart from little or no honesty in what they say, they have failed to follow what Nelson Mandela believed in – freedom, truth, forgiveness, reconciliation and justice.

They have turned a Nelsonian eye to these Nelson Mandela principles in their pursuit of immoral political objectives. They even saw Mandela as an irritant as he opposed wars, colonisation, occupation and exploitation. In life, they spurned his advice and showed little or no respect for him. In death, they gather to sing his praises and describe his death as a blow to mankind.
To know what justice is, one should know, feel and experience what injustice is. Apartheid was one of the most tyrannical forms of injustices. Mandela and tens of millions of South Africans were crushed, dehumansied and robbed of their dignity under this reprehensible system which classified superiority of people on the basis of skin colour.
So when he rose to become the President of South Africa, he upheld justice and restored the dignity of his people as a Rainbow nation was born. As the body of Nelson Mandela lies in state at the Union Buildings in Pretoria, much is spoken about his role as a freedom fighter, a unifier of communities and a great statesman. Little attention is focused on Mandela’s value-based foreign policy and his principled diplomacy. At world forums, he walked tall as a great tower of morality. Realpolitik, according to which countries act in furtherance of their national interests, was not for him. Even in foreign policy and diplomacy, he did what was morally right and stood for justice.
Mandela’s long walk to freedom did not end with freedom for South Africans from the yoke of apartheid. Mandela’s South Africa severed all links with hypocritical imperialists and Zionists and championed non-alignment. One of Mandela’s greatest gifts to humanity was his decision to dismantle South Africa’s nuclear weapons which the apartheid state had built with Israel’s cooperation. 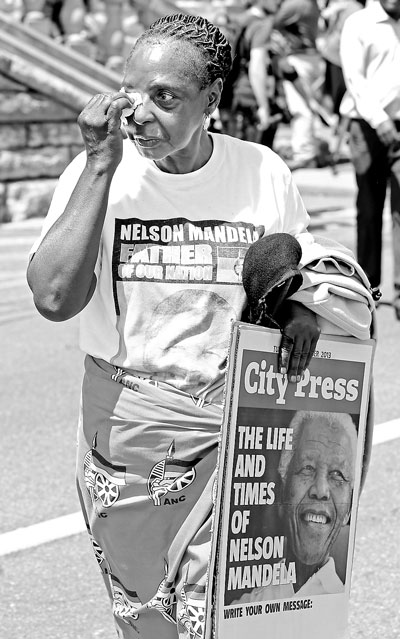 A woman wipes her eyes after paying her respects at the coffin of former South African President Nelson Mandela, who is lying in state, at the Union Buildings in Pretoria yesterday. Reuters/Yves Herman.

James A. Joseph, the US ambassador to South Africa during the Mandela presidency, recalls an incident when he, on behalf of the United States, handed Mandela a carefully prepared demarche to register Washington’s concern over a proposed visit to South Africa by a leader of a country which the US regarded as a pariah state (probably Cuba). Mandela listened carefully and said: “Tell your government that I negotiated with the representatives of the apartheid state without compromising any of my values and there is no danger of my compromising them now.”
The US diplomat related this incident in a chapter he wrote in the book “Nelson Mandela: In His Own Words – From Freedom to Future.” He says Mandela’s commitment to universality in foreign affairs and loyalty to the friends who had supported his cause when Western leaders considered the African National Congress (ANC) a terrorist organisation, often caused alarm in Washington and London, but he remained true to his word and true to his basic values.
Mandela was a true friend of those non-aligned countries which stood by him and the ANC during their difficult years. He was particularly fond of Muammer Gaddafi, whom the West painted as a tyrant and got him killed two years ago. But for Mandela, Gaddafi was a true son of Africa, a brother, a trusted friend of Africa’s freedom movement. When in 1997, President Mandela was preparing to leave for Libya to meet Gaddafi, much to the annoyance of the United States, the State Department protested. In response, Mandela told a Johannesburg ceremony how could “they have the arrogance to dictate to us who our friends should be?”
Mandela even named one of his grandsons Gaddafi. He also strongly opposed NATO’s war on Libya.
Critics say this was because Mandela was beholden to Gaddafi for the financial and moral support he extended to the ANC during the struggle against apartheid. But they are wrong. Mandela’s foreign policy was based on ethics, solidarity with freedom struggles and a sincere wish that the oppressed people the world over should enjoy freedom -- for he knew how miserable life could be when freedom was snatched away. Whatever Gaddafi’s shortcomings and dictatorial tendencies, he stood like a Rock of Gibraltar against imperialism and, like Mandela, saw the dangers of imperialists’ designs. While Gaddafi and others in the Non-Aligned Movement supported the ANC, Britain and the United States branded it a terrorist group. It was only in 2008 that the US removed Mandela’s name from its terrorist watch list.
Mandela saw the war on Iraq as a war for oil and opposed the conflicts in Iraq and Afghanistan and supported wholeheartedly the Palestinians’ struggle for freedom.
The then US President, George W. Bush, spurned Mandela’s advice not to attack Iraq. At Tuesday’s memorial service for the departed South African leader, the campaign Mandela led against the war would have flashed across Bush’s mind. Yet the warmonger may not have repented his having started a war that has led to the deaths of more than one million Iraqis. 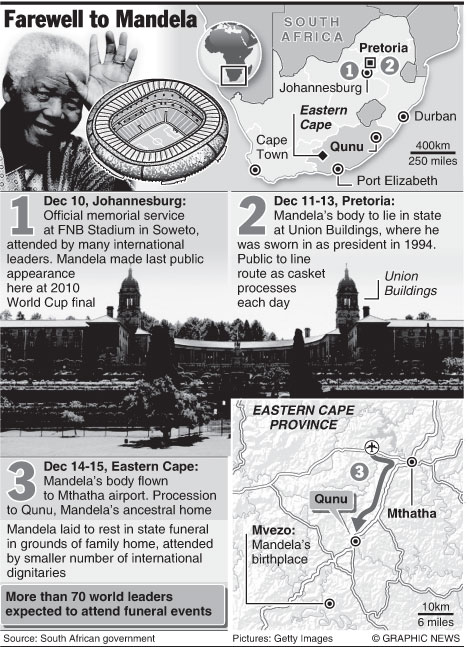 Billionaire businessman and Virgin Group founder Richard Branson told CNN last week that Mandela was “incredibly angry about the invasion of Iraq.”
“I spoke with him before the invasion of Iraq and actually sent a plane to take him to Iraq to see Saddam Hussein to try to persuade Saddam Hussein to step down. He and Kofi Annan were going on a secret mission. The day the plane was due to leave South Africa, sadly the bombing started and they never had the chance to try to get Saddam Hussein to step down in the interest of his country and the people. He was trying all the time to try to resolve conflicts, rather than encourage the starting of conflicts to resolve problems.”
The late leader described the United States as “one power with a president who can’t think properly ... wants to plant the world into holocaust.”
“Bush wants to get hold of the Iraqi oil,” Mandela told an international women’s forum held in Johannesburg as the US was preparing for the war against Iraq in 2003. He urged women around the world to stand up against the US and condemn its war.
“The women’s forum must make sure that all irregularities in the world are rectified. A war on Iraq is something we must condemn without reservation….. We must fight globalisation which is for the high and mighty... This is the task of the forum…. All Bush wants is Iraqi oil, because Iraq produces 64 per cent of oil and he wants to get hold of it…. Bush is acting outside the United Nations and both he and (British Prime Minister) Tony Blair are undermining the United Nations, an organisation which was an idea sponsored by their predecessors.” 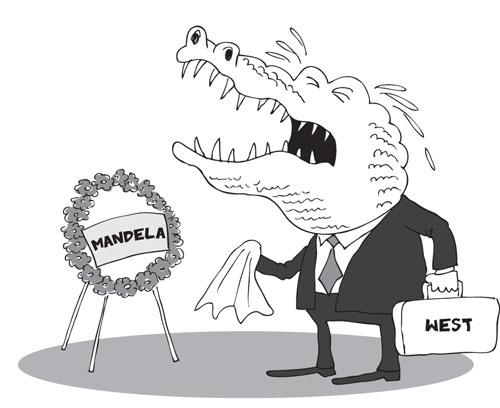 Questioning whether the US was ignoring the UN because its secretary general (Kofi Annan) was a black, the anti-apartheid hero blasted the US leadership saying they killed innocent people in Hiroshima and Nagasaki because “they were so arrogant”.
He said Bush was making the greatest mistake of his life by trying to cause carnage.
“Why does the United States behave so arrogantly... Their friend Israel has got weapons of mass destruction but because its their ally they won’t ask the UN to get rid of it. They just want the (Iraqi) oil... We must expose this as much as possible.”
Mandela also slammed the hypocrisy surrounding the West’s campaign against weapons of mass destruction. He pointed out that the West said not a word about Israel’s nuclear weapons. “Why should there be one standard for one country, especially because it is black, and another one for another country, Israel, that is white.”
US President Barack Obama who made a fantastic speech at Tuesday’s memorial chose not to say that the late leader opposed the mad wars of the US in Iraq, Libya and other places. He suppressed the fact that Mandela opposed big powers exploiting small nations. On the contrary, Obama picked and chose one aspect of Mandela’s principles in statecraft – accommodating dissent. “There are too many leaders who claim solidarity with Madiba’s struggle for freedom, but do not tolerate dissent from their own people.”
Many observers say that notwithstanding a surprise handshake, the remark was aimed at fellow memorial attendee and Cuban leader Raul Castro. Mandela had hailed Cuba as “a source of inspiration to all freedom-loving people”, but Obama’s America continues the economic stranglehold on Cuba in spite of near-universal support at the UN General Assembly for the lifting of the sanctions. So much for Obama’s commitment to Mandela’s principles.
Obama should have said, “There are too many leaders who claim solidarity with Madiba’s struggle for freedom, but did the very opposite of what the late leader had championed: The war on Iraq and the Palestinian struggle.”
Obama thanked South Africans for sharing Nelson Mandela with the rest of humanity. But looking for Mandela principles in US foreign policy is like finding equality under apartheid.
The United States and Mandela were poles apart not only on the Iraq war but also on the Palestinian question. Mandela regarded the late Palestinian leader Yasser Arafat as a “comrade in arms” and described Israel as a “terrorist state” which was “slaughtering defenceless and innocent Arabs in the occupied territories, and we don’t regard that as acceptable”.
At Tuesday’s memorial, several banners displayed at the FNB stadium reminded the world of Mandela’s commitment to the Palestinian freedom struggle. His famous words “We know too well that our freedom is incomplete without the freedom of the Palestinians...” were there for Obama and all those who attended the memorial service to see.
But the United States and the West openly and tacitly support Israel’s illegal occupation of Palestine. Like the Mandela of Robben Island, tens of thousands of Palestinian freedom fighters are languishing in Israeli jails. Marwan Bhagouti, the most famous among these prisoners, in a note smuggled out of the prison said, “Apartheid did not prevail in South Africa, and apartheid shall not prevail in Palestine.”
Obama and other western leaders, if they are sincere about their respect for Mandela, must work towards ending the apartheid system in occupied Palestine where one law exists for illegal Israeli settlers and another for the native Palestinians; where Palestinians are prevented from entering areas exclusively carved out for illegal Israeli settlers, just as the native South Africans were prevented from entering the ‘Whites Only’ areas during the apartheid era; where Israelis consume 80 per cent of Palestinians’ water while the native Palestinians struggle to find water.
World leaders must redouble their efforts to end apartheid in whatever form and wherever it exists. That is the greatest respect one can show Nelson Mandela.