A A A
This week a new term begins for the justices. In the last couple of years there has been the capture of the alleged war criminals, Ratko Mladic of Serbia, Bernard Munyagishari of Rwanda, Charles Taylor of Liberia and the decision by the UN Security Council to ask the chief prosecutor of the International Criminal Court to send to trial the late Muammar Gadhafi.
There was also the killing of Osama bin Laden who, if he had been captured instead, would have been tried as a war criminal. Today will resume the trial of Congolese politician and warlord, Jean-Pierre Bemba 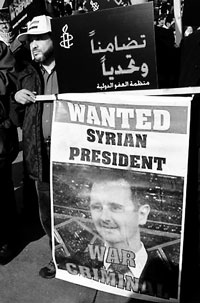 Not since the days of the Nuremberg trials of the leading Nazis has the public’s interest been so aroused on how to punish the “bad guys” (there are no “bad women"!). The change of mood was aptly summed up by the former East Timorese resistance leader and Nobel Peace Prize laureate, Jose Ramos-Horta, who said: “In this day and age you cannot kill tens of thousands of people, destroy a whole country and then just get fired.”
International law, so used to run the common critique, is imprecise, often unenforceable and irrelevant. In 1987 the political scientists Stephen Haggard and Beth Simmons expressed the then prevailing view in academia that the study of international law was “virtually moribund”. Sixteen years later, in the wake of the Pinochet affair and with the trial of former Serbian president, Slobodan Milosevic, these widely- held notions underwent a marked sea-change. The media began to treat war crimes as serious issues for the first time since the trial of Nazi war criminals at Nuremberg.
Doubters, not least the US government, have come round to seeing that an ICC arrest and prosecution is a sharp weapon in the quest for furthering democracy, limiting war and furthering the pursuit of human rights. President George W. Bush, during his last couple of years in office, moved from his total hostility to the Court to quiet cooperation. Under Barack Obama the US has become a public enthusiast, working successfully in the UN Security Council to persuade it to ask the ICC to prosecute Gadhafi. If Obama wins a second term there is a good chance that the US will formally join the ICC.
I recall writing a column in 1992 arguing for an international criminal court to deal with war crimes. I received but one letter- from a law professor at the University of California who said he had had the same idea and had written about it in academic journals-but no one in government was responsive and the idea was dead in the water. Then the war in ex-Yugoslavia shook up everyone’s complacency. Quite quickly a war crimes court for ex-Yugoslavia was established. This was the precursor for the subsequent International Criminal Court. It is a mark of how things can change once human rights activists seize a cause.
The notion of universal jurisdiction has been brought out of the cupboard. Once confined to old issues such as piracy, the slave trade and attacks on airplanes, it has suddenly blossomed into a tool that enables the prosecution of war crimes at the ICC and on a country’s own territory. President Richard Nixon’s Secretary of State, Henry Kissinger, understanding the significance of this, argued in an article in “Foreign Affairs” that carried to its logical conclusion it will turn traditional notions of statecraft and the making of foreign policy on their head.
So what about Kissinger himself? Many consider him a war criminal. At various times French and Chilean magistrates have announced they want to interview him. Christopher Hitchens wrote a well-documented book on Kissinger’s alleged war crimes in Vietnam and Chile.
During the war he and Nixon authorised attacks in Vietnam that were unnecessarily brutal- using napalm against hundreds of thousands of innocent women and children in the villages. They also authorized in secret the massive bombing of neutral, adjacent, Cambodia, which totally destabilized a thriving society.
This is surely worse than what Assad is doing or what Mladic and the Congolese warlords have done. Unfortunately the Court cannot deal with cases that took place before it was created.
Meanwhile, the Court’s reach and confidence is growing. At some point would-be war criminals will surely get the message there is no impunity for them if they engage in war crimes. The penny hasn’t dropped yet but I’m convinced before long it will.
Order Gifts to Sri Lanka. See Kapruka's top selling online shopping categories such as Toys, Vegetables, Grocery, Flowers, Birthday Cakes, Fruits, Chocolates, Clothing and Electronics. Also see Kapruka's unique online services such as Sending Money,Online Books, Delivery Service, Food Delivery and over 700 top brands. Also get products from Amazon & Ebay via Kapruka Gloabal Shop Sri Lanka