A A A
Israeli attacks on the Gaza Strip and Hamas’ angry reaction to them are nothing unusual. But this time around the crisis assumes special significance because of the uncertainties over how the new government in Egypt would react and Israel’s worries over how President Obama himself would respond, given his rocky relationship with the hawkish Israeli Prime Minister Benjamin Netanyahu.
At the moment, what is more worrisome for the US is the response of Egypt to Israel’s aggression on the Palestinian people. The US had not much to worry about when its puppet Hosni Mubarak was in power in Egypt. The Mubarak regime collaborated with Israel during the 2008 Gaza war.
The new Mohammed Mursi government, in sharp contrast, recalled its ambassador from Tel Aviv and called for an urgent meeting of the UN Security Council and the Arab League. Mursi also spoke to Obama on Wednesday and agreed on the importance of working together to calm the situation as quickly as possible.
As Netanyahu yesterday vowed to widen the military operation, Obama capitulated and backed Israel’s aggression on the Palestinians people, thus squandering the opportunity to act as an honest broker in the Middle East peace process.
During the election campaign Obama and his rival Mitt Romney tried to outdo each other in displaying their loyalty to Israel. In their last election debate, the two candidates made no less than 30 references to Israel. Obama’s election pledge to support Israel came despite Netanyahu’s open backing for Romney and millions of dollars in campaign donations for the Republican candidate from Jewish lobby members.
Notwithstanding Netanyahu’s support for Romney, Obama, in the wake of the current tense situation in the Gaza, found fault with Hamas, signalling that the US has not abandoned Israel. On Wednesday evening, Obama telephoned Netanyahu and both men agreed that Hamas needed to halt its attacks on Israel to allow the situation to de-escalate. 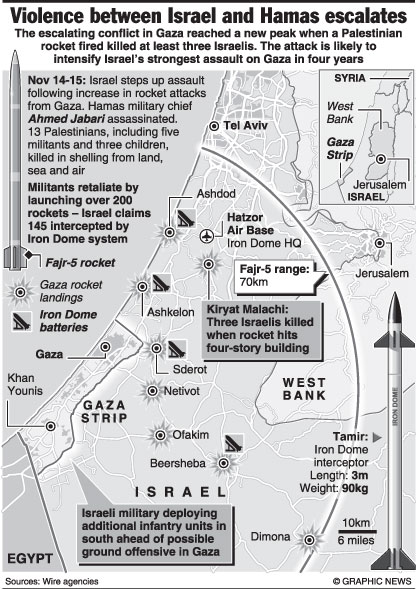 More pro-Israel was the US State Department. In a statement, it strongly condemned the barrage of rocket fire from Gaza into southern Israel. “There is no justification for the violence that Hamas and other terrorist organisations are employing against the people of Israel. We call on those responsible to stop these cowardly acts immediately. We support Israel’s right to defend itself and we encourage Israel to continue to make every effort to avoid civilian casualties.”
As usual, as far as the US is concerned, Israel can do no wrong. There is no acknowledgment in the State Department statement that Hamas rocket attacks came only in retaliation for continuous Israeli attacks on the Gaza Strip in recent weeks.
Israel said Hamas’ rocket attacks alone did not prompt the killing of al-Jabari. He was killed because he had been responsible for terror attacks in the past ten years. So Israel has the temerity to admit to extra-judicial killing or targeted assassination which is condemned by civilised nations.
How can the United States condemn Israel when the US itself is carrying out extrajudicial killings with a culture of impunity? The Obama administration’s killer squad not only eliminates terrorists who are citizens of other countries.  It also kills US citizens in violation of the US constitution – an act that warrants Obama’s impeachment. Anwar al-Awlaki, his colleague Samir Khan and the 16-year-old son of Awlaki – all US citizens – were killed in two drone attacks in Yemen last year. That the protection of the constitution was denied to the three Muslim US citizens perhaps points to institutionalised racism in the Obama administration although his re-election on November 7 indicated that a majority of the American voters – among them was a big segment of different minorities and educated youths – had spurned racism.
In fact, the US has now resorted to targeted killings in an open manner – it has been doing it secretly through its secret agents -- because Israel has shown the way. However, the US and its allies were quick to condemn such acts when other countries were suspected to have carried out such killings. For instance, when Russian spy turned defector Alexander Litvinenko suddenly fell ill and died in 2006 due to nuclear poisoning, the US and its western allies were quick to condemn Russia.
Such hypocrisy apart, it is not too late for Obama to bring in ethics and morality to foreign policy. We still hope, he can start it with the ongoing Gaza crisis. If morality, ethics, justice and peace are to be the criteria that shape US foreign policy, many of the issues can be sorted out through negotiations. But if foreign policy becomes power-centred, it produces noting but mayhem and madness.
If the US could intervene on the side of justice, the Palestinian problem could be easily solved. The US can support, protect or defend Israel; but whatever it does it should not do that by inflicting injustice to the Palestinian people who are losing whatever little land they have with each passing day. Even as the US election results started pouring in, Israel announced that it would build some 1,200 new houses for Jewish settlers in the occupied Palestinian territory.
If only the US had applied pressure on Israel to comply fully with the provisions of the Camp David Accord of 1979 or the Oslo Accord of 1993, there would have been a Palestinian state by now. But, alas, instead of pursuing justice, the US has encouraged Israel’s crimes against humanity. It has used its veto power in the UN Security Council 41 times in defence of Israel and to perpetuate the suffering of the Palestinian people.
Meanwhile, Obama is under heavy pressure to militarily intervene in Syria and commit US troops in any possible Israeli war on Iran. But the silver lining is that the second term president is in a better position to ward off external pressure from allies such as Israel and lobbies such as the America-Israel Public Affairs Committee (AIPAC). The Democratic Party of his can retain the presidency in 2016 not by submitting to Israel or the arms lobby but by improving the economy and the living standards of the American people. That was the message the American voters delivered at the November 7 elections.