A A A
Assange, the editor in chief of the whistleblowers’ website WikiLeaks, was born in Australia. He is alleged to have raped or sexually molested two girls in Sweden. He has sought asylum in the Ecuadorian embassy in London because Britain wants to extradite him to Sweden, which is likely to extradite him to the US where he may face a serious charge.
That he became a wanted person only after he published leaked US diplomatic cables that exposed and confirmed the United States’ immoral politics makes one wonder whether there was a concerted effort to silence him for good. Before the exposure, he was hailed as a hero, a free media activist and a promoter of democracy. He received several journalism awards, including the 2009 Amnesty International Media Award, Readers’ Choice for TIME magazine’s 2010 Person of the Year, the 2011 Sydney Peace Foundation gold medal and the 2011 Martha Gellhorn Prize for Journalism.
Here is a brief backgrounder on the Assange saga after the November 2010 exposé of the US diplomatic cables. 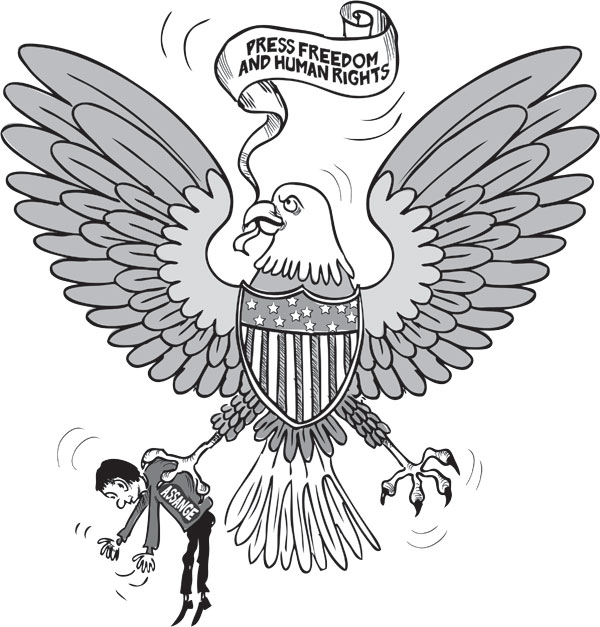 A Swedish court issued a European arrest warrant after he was accused of having condom-less sex with two women on two occasions. Assange surrendered to a British court; he was arrested and remanded for ten days before he was given bail. The court ruled that he could be extradited to Sweden. Assange challenged the judgment in a high court, but it upheld the lower court verdict. The WikiLeaks chief and his lawyers supported by free media activists went to the Supreme Court.
The court on May 30 this year upheld in a 5-2 verdict the extradition ruling but gave him two weeks’ time to appeal after his lawyers argued that the judgments of the majority relied on an interpretation of the Vienna Convention on the Law of Treaties which was not argued during the hearing.
While his lawyers were contemplating whether to make an appeal to the European Human Rights Court, Assange on June 19 walked into the Ecuadorian embassy in London and sought asylum. Since then he has been living in the embassy which has been surrounded by the British police.
Assange and his supporters fear that if he is extradited to Sweden, it will be only a matter of time before he is extradited to the United States where he faces a much more serious charge – putting the lives of thousands of Americans in harm’s way by publishing hundreds of thousands of confidential diplomatic cables from US embassies around the world. The treason charge which the US may slap on Assange is punishable by death or life sentence.
At a time when questions are being raised about the independence and impartiality of the judiciary in the United States, the fears of Assange and millions of his supporters worldwide are justified. The judgment a US court delivered in the Aafiya Siddiqui case must surely be a cause for worry. Siddiqui was a neuroscientist who was suspected of having links with Islamists fighting the US occupation in Afghanistan. She was arrested by Pakistani intelligence agents and handed over to US authorities. She was detained and allegedly tortured. Her torturers had told her that they had killed her youngest son Suleiman and showed pictures of the small boy lying in a pool of blood. A frail and weak Siddiqui --prisoner number 650 at the notorious US-run Bagram torture chamber in Afghanistan -- was finally charged with trying to grab the rifle of a US marine and kill US military personnel. She was sentenced to 86 years in prison in a judgment that shocked the world’s human rights community. 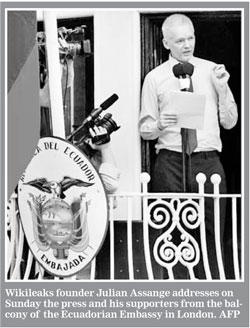 If Assange is extradited to the US, there is little guarantee that a similar fate would not befall him. It is indeed sad that the judiciary in the United States has also come under a cloud and become tainted by the war on terror, the prosecution of which has seen moral principles, human rights, freedom of expression and respect for international law being dumped in the garbage bins at the White House, the Pentagon, the State Department and the US Congress. The US allies are no better.
Thus it comes as little surprise when Britain threatened to storm the Ecuadorian embassy and arrest Assange in violation of the Vienna Convention on diplomatic relations; when Australia’s Prime Minister Julia Gillard refused to defend the Australian citizen; when an advisor to Canadian Prime Minister Harper called for Assange’s assassination; and when Mike Huckabee, the former Governor of Arkansas and presidential candidate at the Republican primaries in 2008, said the WikiLeaks founder should be executed.
What’s more, on December 6, 2010, the rightwing Fox television’s political commentator Bob Beckel sought his elimination and said, “there’s only one way to do it: illegally shoot the son of a bitch.”
Though Assange said the statements amounted to an incitement to commit murder, those who call for his death face no threat of an arrest. The wheels of justice, it appears, turn only to punish those who challenge the empire.
Assange’s honeymoon with phony champions of human rights and media rights ended the moment WikiLeaks started to expose the empire’s war crimes in Iraq and Afghanistan and the multinationals’ crimes against humanity, especially their dumping of toxic waste in Africa. Their fury reached breaking point when WikiLeaks published the diplomatic cables. Instead of being grateful to Assange who was generous enough to vet the cables before sharing them with the Guardian, the New York Times and other top newspapers around the world, the empire and its yes-states joined in the witch-hunt.
On Sunday, addressing the media and his supporters from the balcony of the Ecuadorian embassy in London, Assange made a powerful speech – a speech that must shake the US conscience if it has one. He said: “As WikiLeaks stands under threat, so does the freedom of expression and the health of all of our societies…We must use this moment to articulate the choice that is before the government of the US. Will it return to and re-affirm the revolutionary values it was founded on. Or will it lurch off the precipice, dragging us all into a dangerous and oppressive world in which journalists fall silent under the fear of prosecution and citizens must whisper in the dark.
“I ask President (Barack) Obama to do the right thing: the United States must renounce its witch-hunt against WikiLeaks…”
In response, Washington said on Tuesday that there were no moves to extradite Assange to the US.
But this position could change as a grand jury in Virginia has sought twitter feeds of Assange and WikiLeaks while Assange is also wanted in connection with the case of Bradley Manning, the marine who is alleged to have copied the US cables and leaked them to WikiLeaks.
Given the lack of morality in what the US says and does, Assange could hardly hope that he would not end up in an isolated cell in an orange jumpsuit.
As the Assange affair attracts international attention, the embedded Western media have launched a campaign to vilify the messenger in a typical case of dog eating dog. Instead of hailing Assange’s brave journalism and battle to uphold the people’s right to information, they ridicule him as a naughty boy and his speech from the balcony as a theatrical statement. 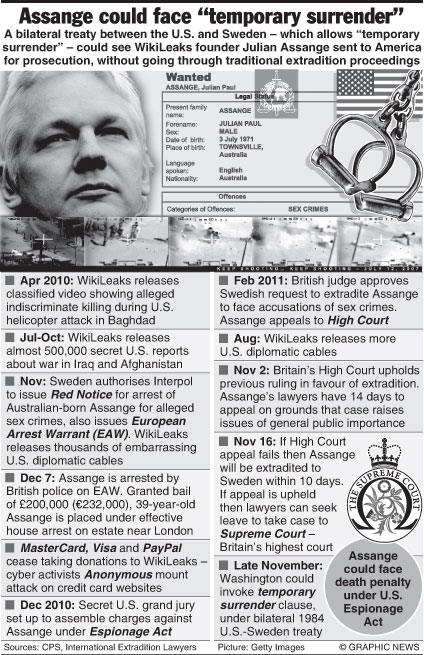 The embedded type says little or nothing about the witch-hunt of Assange or the alleged travesty of justice in the Aafiya Siddiqui case. However, when a Russian court imposed a two-year jail sentence on the members of Pussy Riot band, the Western embedded media criticised the ruling as politically coloured. When a Pakistani court handed a 30-year sentence to a doctor who spied for the US in the hunt for al-Qaeda leader Osama bin Laden, they denounced it. Double-standards, indeed. But no matter, how many times the double standards of the US, its allies and the embedded media are exposed by WikiLeaks and the un-embedded media, they won’t veer away from their immoral way of doing politics and journalism.
Order Gifts to Sri Lanka. See Kapruka's top selling online shopping categories such as Toys, Vegetables, Grocery, Flowers, Birthday Cakes, Fruits, Chocolates, Clothing and Electronics. Also see Kapruka's unique online services such as Sending Money,Online Books, Delivery Service, Food Delivery and over 700 top brands. Also get products from Amazon & Ebay via Kapruka Gloabal Shop Sri Lanka