That canard has been planted again apparently with Indian and possibly Western connivance. But this time the story filed by Madhav Nalapat for India’s weekly Sunday Guardian of October 6, 2013 has a Colombo dateline. According to Nalapat, Sri Lanka is fast becoming the new launching pad for Pakistan’s alleged terrorist outfit the Lashker-e-Taiba or the LeT.
S. Venkat Narayan, a well known New Delhi journalist filed the story in a Colombo daily of October 7. This is not the first time stories linking Pakistan’s LeT and Sri Lanka had found space in the local media. Within a month of Sri Lanka defeating the LTTE, the first of such reports emanated on June 19, 2009 from the US State Department alleging that LeT has established a facilitation centre in Sri Lanka. The US story was the beginning of several similar allegations of LeT operating centres in Sri Lanka that began to emerge mostly from unnamed Indian intelligence sources.
Then in September 2010 reports sourced to Indian intelligence said that Maharashtra’s German bakery bomber, Himayat Baig had claimed while in Indian custody, that he was trained in Colombo. Thereafter as recently as August 22, 2013 another story originating from Indian intelligence sources surfaced claiming that LeT terrorists were planning attacks on South India from Jaffna! These were claims emanating from India, dished out to the media without any supporting evidence. These intelligence reports were in most instances never confidentially shared with the country concerned but planted in the media with political purposes, as we shall soon see. Significantly Sri Lanka’s defense establishment took care to reject each of the claims.
One may write these off as typical Indo-Pakistan rhetoric in the background of the 65-year-old record of conflicts over Kashmir. But we need to probe deeper as to why the LeT story is being tenaciously pursued and sought to be planted in Sri Lanka! Recent events worldwide with increasing US interventions, armed raids and military invasions, irrespective of ‘R2P’, transgressing with impunity the sovereignty and integrity of independent countries under challengeable, controversial and false pretexts as seen in Iraq, Afghanistan, Pakistan, Syria and more recently in Somalia and Libya, must alert us for possible Trojan horses for interventions in Sri Lanka.
The kidnapping of Abu Anas al-Libi from his home in Tripoli by US forces was protested promptly by the pro- American Libyan Prime Minister, who was himself kidnapped soon after his protest, by Libyan forces presumably more loyal to America, though released shortly thereafter, perhaps in exchange for the Prime Minister’s silence!
US apart, India itself had not hesitated to wantonly interfere in Sri Lankan affairs, as it did in June 1987 which led to the controversial Indo-Sri Lanka Accord.
John Perkins, an American former ‘economic hit man’ as he himself claims in his book of confessions (2006) spells out the shocking inside story of how America took over the world. He states, “People like me are paid outrageously high salaries to do the systems bidding. If we falter, a more malicious form of hit man, the jackal, steps to the plate. And if the jackal fails, then the job falls to the military.”
Probably the jackals stepped in to execute Osama bin Laden hiding in Pakistan, without arresting the world’s most wanted Al Qaida leader and obtaining valuable intelligence, while President Obama and his war-mongering Cabinet watched the horror of execution, minute by minute over breakfast. Surprisingly the interrogation of the world’s “most wanted criminal” was never considered important by the United States unlike the little known Abu Anas al Libi who was taken across to the US for interrogation!
It is probably the jackals who stepped in Libya on October 5, 2013, and kidnapped Abu Anas al- Libi while the jackals entrusted with the Somalian operation botched the show! Going by Perkins’ book, it is obvious that in Iraq and Afghanistan, the US military stepped in while in Syria even a pack of jackals could not deliver, possibly the military may step in, after Congress formally approves Obama’s plea to increase the US debt ceiling from the present US $ 16.7 trillion, a whopping figure that the US economy can for sure, end up in disaster for itself and the rest of the world. 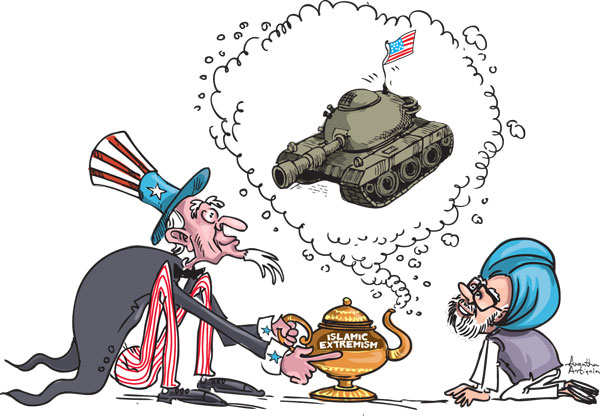 Perkins states further, “Empires never last. Every one of them has failed terribly. They destroy many cultures as they race towards greater domination, and they themselves fall. No country or combination of countries can thrive in the long-term by exploiting others.”
False accusations and fictitious intelligence reports are increasingly being used as political tools to set-up legitimacy for direct interventions and achieve collateral objectives in third world countries. Sri Lanka can be no exception! Iraq was accused of possessing weapons of mass destructions to justify invasion, a war that killed and maimed a million Iraqis, never found the WMDs, but the US did succeed in its real objective of putting back Iraq by around 50 years and thereby guaranteed the safety of Israel from  the latter’s perceived ‘enemies’.
Let us not forget that the US State Department works with the Israeli Holocaust Memorial hand in glove and had successfully made the world believe that Iraq ‘with’ WMD is a threat to Israel with 200 nuclear war heads! Afghanistan was accused of training and harbouring Al Qaida, and used the accusation as legitimacy for direct military intervention following 9/11. The US succeeded in temporarily crippling the Taliban regime and destroying what little was left of the country while putting back an already backward country by several more decades.
Pakistan was threatened of being bombed back to the stone age by US Secretary of State General Collin Powell and his Deputy Richard Armitage, within 24 hours of 9/11/2001,unless Pakistan opened its country for the US to destroy the “Islamic fundamentalist” regime in Afghanistan, a mission that failed but destabilised Pakistan beyond measure. Nuclear armed Pakistan, with a population of 180 million people led by a powerful General did surrender to US bullying! The threat was made without any evidence of Afghan involvement in 9/11, obviously because it was made even before any US investigations into 9/11 had commenced.
The opposition in Syria was openly and shamelessly armed by several Western powers aimed at regime change, to topple President Assad an avowed supporter of Palestine, the latter a nation without a country and a people without a land to live or a passport to leave!
Restoration of democracy is the publicized aim but destroying these countries, their resources, their scientists, their intellectuals, professionals were what the world saw but watched in unbelievable silence as the US from President Regan downwards made sure the Middle-East was made safe for Israel at any cost, certainly at the cost of the lives and properties of all others!
The point is the US is no longer in need of R2Ps or other internationally acceptable legal grounds to do what it wants in any part of the globe. The world order that was established at great pains by international jurists and peace-loving leaders of the world, inspired by the lessons of the American and French revolutions and founded on the Universal Declaration of Human Rights is under serious threat, and worse the US no longer wants to hide its penchant for world dominance without accountability.
These are some amongst other reasons why Sri Lanka needs to be careful about false or misleading intelligence reports which are possibly aimed at securing a semblance of legitimacy for direct interventions which must necessarily, from the foreign interventionist’s point of view, end up in regime change.
“Islamic” fundamentalism and extremism more than terrorism have been used elsewhere for military led invasions. It is the new found Aladdin’s lamp; scratch it even stone walls will open!
There is evidence that Western Intelligence Agencies are working closely with India. They do with other countries as well, offering overseas trips to top military and police officials of strategic importance. Significantly the US State Department report, which set the LeT ball rolling here, no sooner the LTTE was defeated, is obviously a false flag on Sri Lanka. The secret report, alleging that Lashker-e-Taiba had established a facilitation centre in Sri Lanka and leaked by Wikileaks says that this intelligence had been passed on to India. There is no indication in the US report that this ‘intelligence’ had been shared with Sri Lanka, the country which would have benefitted most if the clue was correct. If it had been passed on to Sri Lanka, authorities here could have promptly detected the centre if ever there was one and apprehended the operatives and taken issue with Pakistan. It is apparent that the US wanted India to use the false flag, perhaps on a need based strategy. (mm_zuhair@yahoo.com)
The writer M.M. Zuhair Presidents Counsel is the former Ambassador to Iran.  He could be reached at mm_zuhair@yahoo.com.