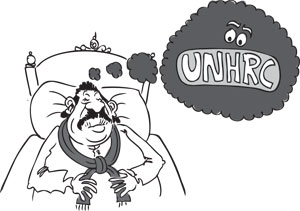 In the latest turn of events, the government that repeatedly had turned down UN Human Rights High Commissioner Navi Pillay’s request to visit the country had finally accepted it. Whether she will be impartial enough to paint a realistic picture on Sri Lanka in the eyes of the world, is another matter.  The very country that went on to say that it needed  no expertise or advice from the international community on  the  human rights of its citizens, has finally surrendered to pressure.  Clearly, the heat from Geneva has once again reached Sri Lanka.
Yet, a politically matured government should have resorted to more effective methods than the last-minute steps, that would not take the country anywhere near the target.
Since the conclusion of the UNHRC sessions in March, the government had enough time on its hands to start rectifying many areas that needed immediate attention in the national reconciliation process. Yet, it conveniently opted to complete the paper work for many proposals that were least likely to see the light of day. The rehabilitation of the ex- LTTE soldiers is likely to end on a successful note. Demining would be another plus point in Sri Lanka’s report card, if it paves the way for sustainable resettlement. Yet, the Lessons Learnt and Reconciliation Commission (LLRC) report has been left hanging in the air. The only fruitful endeavour of the government during the grace period is releasing the National Action Plan to implement the LLRC recommendations.
The snail pace of the government in matters of national importance hardly amazes us.
That Sri Lanka has another document in its bag may hardly make things rosy for the country that has been exposed to criticism by the international community. The country’s action has been no better than that of a school kid, getting ready to go to school after a long vacation.
The truth is that, the real picture of Geneva defers from what the Sri Lankan ultra-nationalistic ideologies have conjured up in the eyes of the  public. Perhaps, it is as non-transparent as the Sri Lankan government itself. The diplomatic duplicities in the world body are as vicious as the contemporary parliamentary politics where the voice of the majority devours that of the minorities.
Thus, when placed at the receiving end, Sri Lanka would know the best defence mechanisms. If it is as pure as the government brags, then there is no need for placard-holding and effigy-burning in Colombo.
After all, sending a new permanent representative cannot always save the day for us.