A A A
For decades, the military has played this role either directly or through presidents, in the 1990s, while the judiciary fell in line.
Yousaf Raza Gilani’s ouster through a court order sets a new precedent and, hence, is inherently divisive and open to a fractious debate prompting some to characterise the Supreme Court ruling as a ‘judicial coup’. Incidentally, there was always an element of inevitability to such an action. 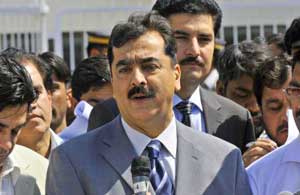 By defying the court’s orders and refusing to write a letter to the Swiss authorities asking for a reopening of the money-laundering case against President Asif Zardari, Gilani had left the court no option but to take drastic action after showing much restraint for nearly two years.
The verdict had created a dangerous situation of a possible showdown between the judiciary and parliament where the ruling coalition has an overwhelming majority. Such a course could have plunged the country into a deep crisis at a time when it is already facing multiple domestic and external challenges.President Zardari and his party have shown a remarkable sense of maturity and responsibility by accepting the decision and losing no time in setting about the task of finding an alternative choice.
Khaleej Times