A A A
The Lessons Learnt and Reconciliation Commission was appointed by the President to investigate and report on the lessons to be learnt from a conflict lasting around three decades and submit recommendations for reconciliation between the different communities, ethnic and religious. It took the Commission around 1-1/2 years to investigate, discuss and formulate its report. The Commission set about its task in a professional manner accepting representations from various segments of the population. More importantly, the Commission gave an opportunity for the voice of the people of the North and the East, who suffered the most from the conflict to express their views regarding this conflict. The Commission took great care to visit the main areas of conflict so that the victims of the conflict could narrate their experiences in familiar surroundings. 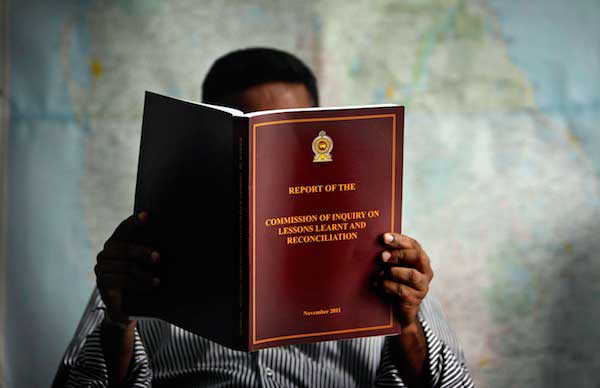 The report of the Commission has been hailed by the moderate sections of the people, both local and overseas. The fact that it has been criticised or condemned by extremist elements, local and foreign, is also perhaps a reflection of the moderate nature of the report.
For monks and lay Buddhist scholars and preachers to appeal to Buddhists to adopt an attitude of generosity and consideration towards minority communities and religions is no difficult task. There are many sayings of the Buddha which support such an approach to minorities.

The Buddha did not refer much to communal, national, race, ethnicity and such differences, since they were not that relevant to the society in Northern India at that time. The main factor that divided that society was the caste system where one is born to a particular caste which remains so for life. Under this system different kinds of work were assigned to different castes and one could not pursue work in other areas. With time, there was flexibility and people began to pursue other activities. However, some castes continued to be considered higher and others lower.

The Orders of Bhikkhus and Bikkhunis were open to all people irrespective of caste, wealth and social status. Actually, some of the distinguished members of these orders were from the so-called low castes. In fact, those entering these Orders had to change their names and titles so that they did not indicate their rank and birth in lay life.
Buddhism should and can be a unifying force. The Buddha urged his disciples to promote concord among people and not to sow discord and dissension  An argument in Buddhism against differences between the mankind is biological. It has been pointed out that there are differences between various species of plants and animals. The foot of an elephant is different to that of a horse or deer. Thus, there are differences between animals as well as among plants. On the other hand, the feet of men are not different despite differences in caste, community, nationality, religion or social standing.
The Buddha led an exemplary life treating all people alike and extending goodwill and compassion in equal measure. He did not discriminate even between the good and the evil and helped them all wherever feasible to traverse on the path to liberation.
There have been rare instances where dissension and discord has been spread in the name of Buddhism. Such actions are totally contrary to the fundamental teachings and the spirit of this great religion.
Our nation has witnessed 30 years of war, which caused untold misery and a sense of deep insecurity to a large number of Its people. The recommendations of the LLRC regarding the important role that could be played by religions should be supported by the Buddhists for the welfare and progress of all people that comprise this country.
See Kapruka's top selling online shopping categories such as Toys, Grocery, Flowers, Birthday Cakes, Fruits, Chocolates, Clothing and Electronics. Also see Kapruka's unique online services such as Money Remittence,News, Courier/Delivery, Food Delivery and over 700 top brands. Also get products from Amazon & Ebay via Kapruka Gloabal Shop into Sri Lanka.