A A A
I recall once going to interview the then secretary-general of Amnesty International, Thomas Hammarberg, and asking him the country I should visit that had the worst human rights record in the world. He said “Guatemala”. I then asked how many political prisoners did it have. (Amnesty has a well tried and successful system of adopting political prisoners and then showering the authorities with demands they be released.) He replied “There are no political prisoners only political killings”.
Only in 1996 did the country emerge from a 36 year long civil war which pitted Mayan Indian insurgents against the army which was backed by the US, even during the presidency of that most pacific of all recent presidents, Jimmy Carter. Later, to his credit, President Bill Clinton, on a visit to this Central American republic, apologised for America’s role. It would have been shameful if he hadn’t because a UN investigation had revealed not long before that it was the Guatemalan authorities who had done by far the larger part of the killings.
It was Amnesty International who brought to the world’s attention Guatemala’s murderous one-sided war, the torture and the ravines packed with bodies over large parts of the countryside. And it was me, writing for the New York Times, after a visit to see it for myself, who tracked down the former vice-president, Francisco Villagran Kramer, who had fled to Washington DC, disgusted with what he had observed in the top echelons of the government. He told me the killings were organised not by rogue militias nor by landowners, as the government propaganda said, but out of the president’s office itself. Amnesty had come, by a different route, to the same conclusion. My article, prominently displayed, brought no senator to his feet, triggered no other newspaper or TV program and disappeared, forgotten, almost overnight. The incumbent president, Ronald Reagan, was called “The Teflon president”. So urbane, radiating goodwill, was he that he was somehow beyond reproach even though his government was pouring in weapons and army trainers. Over the years when the occasional reporter asked a question he would say that the Guatemalan army was fighting communism just as US-supported governments were right through Central America. Communism’s reach had to be stopped, he argued publicly, or the red menace would be on Texas’ doorstep in no time at all. Cuba and Moscow were behind it, he would say. Yet there was only modest Cuban involvement and none at all from Moscow. 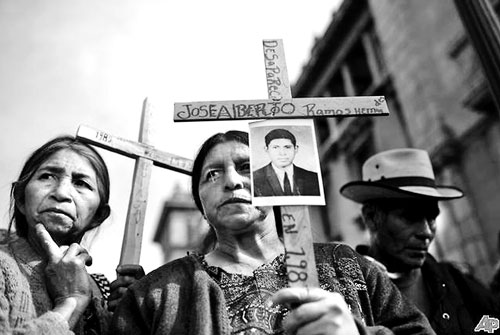 The International Criminal Court has no authority to deal with the war crimes of Guatemala because these horrific events happened long before the treaty establishing the Court was agreed. But in the last year Guatemala has begun to prosecute some of those involved. Last week a court sentenced to 70 years in prison a former head of the country’s police force, Pedro Garcia Arredondo, for the kidnapping of a student three decades ago. He also faces separate murder charges in connection with the 1980 burning of the Spanish embassy in which 36 people died.
In March a former soldier, Pedro Pimental Ross, was sentenced to a jail term of 6,060 years for his role in the massacre of the village of Dos Erres in 1982, one of the most violent events in the civil war. Over three days soldiers systematically killed hundreds of men, women and children, shooting and bludgeoning them to death and throwing the bodies down a deep well. But it would have been better to prosecute 6,060 officers than one soldier singled out as a scapegoat.
In January a court ruled that the former military leader and later the country’s “elected” president, General Rios Montt, aged 85, should face charges for genocide and crimes against humanity.
Belatedly Guatemala is dealing with its terrible past. But most of the murderers continue their lives untouched. It will take decades to recover. The army and police, besides the mass killings of peasants, targeted the many Catholic priests who worked behind the scenes to oppose the government, local elected officials, mayors and teachers. Without them it has been hard for villagers to pick up the pieces and start a new life. The gangs once affiliated to the government are now deep into the drug trade. The new president, Otto Perez Molina, was a former head of military intelligence and some say a party to mass murder. However he is allowing the attorney-general and former human rights worker, Claudia Paz y Paz, a free hand to prosecute war criminals. One step forward. One step back?