A A A
Again last week hundreds of trains, buses, cranes and private vehicles were crippled by engine problems apparently due to sub-standard diesel supplied to them. Thousands of people were inconvenienced, and the damage caused to the vehicles was estimated at millions. 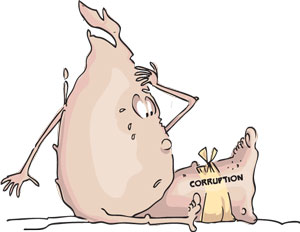 The Petroleum Ministry admitted the sub-standard diesel had been bought from a black-listed supplier and that a committee had been appointed to probe how this happened. Some months ago a large stock of sub-standard petrol was bought from this same black-listed supplier and millions of rupees was paid to owners whose vehicles were damaged. In that instance also a probe committee was appointed. But such committees had become a waste of time, money and a public joke. Accountability, a key factor in democracy because ministers and top officials are expected to be just stewards of public funds, has been taken out of the account books with no checks on the illegal cheques they get for fraudulent deals with dubious companies.
Another instance is the hedging scandal for fuel purchases. Our people might have to pay as much as US$175 million for this deal which was signed secretly with a private bank. No one is being held accountable, and the blame game will probably go on while the people of Sri Lanka will finally have to pay the billions of rupees. If these officials or politicians are at least named, shamed and sacked, it will be a deterrent to others, but Sri Lanka has apparently fallen from such a moral high road.
While corruption and blatant abuse of public funds go on, the official inflation rate has soared to a staggering 9.8% -- the highest in more than ten years. The unofficial rate may be much higher. Officials say the official inflation rate rocketed from 2.7 in February this year to 9.8 in July, mainly due to the soaring cost of living and the bankruptcy of the village economy, especially the vital field of agriculture, due to the unprecedented drought and mismanagement by officials. Millions of farmers are known to be bankrupt with no water even to wash the mud off their backs, giving us golden memories with silver tears of a time when the well-known writer Robert Knox said the farmer, when the mud was washed off his back, was fit to be the king of the country. That king is now a beggar in a mud hole, while moral beggars are making hundreds of millions along with personal power, prestige and privileges. What a shame, what a sham for a country that is boasting of becoming the model or miracle of Asia.
Order Gifts to Sri Lanka. See Kapruka's top selling online shopping categories such as Toys, Vegetables, Grocery, Flowers, Birthday Cakes, Fruits, Chocolates, Clothing and Electronics. Also see Kapruka's unique online services such as Money Remittence,News, Courier/Delivery, Food Delivery and over 700 top brands. Also get products from Amazon & Ebay via Kapruka Gloabal Shop into Sri Lanka.