A A A
The article titled, ‘How meaningful are Jayalalithaa’s love letters to Modi?’ appeared on the website and carried with it a graphic of Jayalalithaa, pen in hand, writing. Alongside was a heart shaped ‘thought bubble’ with the photograph of Indian Prime Minister Narendra Modi.
The graphic appeared to poke fun at Jayalalithaa suggesting that she had romantic thoughts about Modi, but the article itself made no such claim. It focussed on the dispute between fishermen from Sri Lanka’s North and Tamil Nadu, an issue in which Jayalalithaa frequently intervenes.
Within hours of the article appearing on the website, there was outrage in India. There were calls for apologies from Sri Lanka and President Mahinda Rajapaksa. Several political parties which were allies of the ruling Bharathiya Janatha Party (BJP) were among those demanding a retraction.
Colombo responded swiftly. The Defence Ministry removed the article from its website and published an unqualified apology. “The article was published without appropriate authorisation and does not reflect the official position of the Government,” the Ministry said.
However, the furore continued in India, with pro-Jayalalithaa political parties attempting to gain maximum mileage from the incident. Debates in both the Lok Sabha and the Rajya Sabha were disrupted by members of Jayalalithaa’s All India Anna Dravida Munnetra Kazhagam (AIADMK).
When questioned in Parliament, Indian External Affairs Minister Sushma Swaraj assured that Sri Lanka’s envoy in India would be summoned to convey India’s displeasure.
“The government has strongly condemned the development,” Swaraj told the Rajya Sabha.
One of the first tasks of Sri Lanka’s new envoy to New Delhi, Sudarshan Seneviratne was to listen to India’s “anger and concerns” over the issue conveyed to him by the Joint Secretary in-charge of the Sri Lanka division in the Indian Ministry of External Affairs.
The issue however was still being kept alive in Tamil Nadu. Protests were organised at which photographs of President Mahinda Rajapaksa were set on fire. A Sri Lankan junior cricket team touring Tamil Nadu was forced to return to Colombo following “security concerns” regarding the team’s safety. 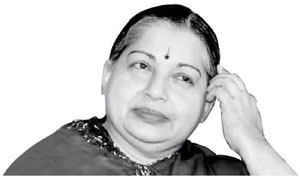 President Rajapaksa was asked about the offending article on Tuesday. He offered his apologies. “I regret that it has happened. I have called for a report on it,” Rajapaksa told reporters in Colombo. It is left to be seen whether this would satisfy Jayalalithaa, who often revels in such controversy.
A movie star turned politician, she honed her skills in more than 140 movies before taking to politics as a career. She has since been in the thick of controversy in the rough and tumble world of Tamil Nadu politics.
Born in 1948 at Karanataka, Jayalalithaa began her movie career while still a schoolgirl at the age of thirteen acting in an English movie in 1961. She then switched to Tamil movies and her big break came when she co-starred with male heartthrob Sivaji Ganesan in 1972.
Before long, she was a much sought after actress winning critical acclaim and many national awards. It also brought her in contact with M. G. Ramachandran the actor turned politician who went on to become Tamil Nadu’s Chief Minister. It was a path that Jayalalithaa was also to take.
Retiring from movies in 1980 at the age of 32, Jayalalithaa joined the party Ramachandran founded, the AIADMK.  Three years later, she became propaganda secretary for the party. She was elected to India’s Upper House, the Rajya Sabha in 1984.
Ramachandran died in 1987 and the AIADMK split into two factions, one group supporting his widow Janaki Ramachandran and the other favouring Jayalalithaa. The former was defeated in the 1989 polls and retired from politics. Jayalalithaa was appointed leader of the AIADMK.
Jayalalithaa was elected to the Tamil Nadu legislative assembly in 1989 and was appointed Leader of the Opposition. Ironically, in 1991, following the assassination of Rajiv Gandhi days before the elections, her alliance with the Congress Party enabled her to ride the wave of sympathy and win the polls.
The ADMK alliance with the Congress won 225 out of the 234 seats contested in Tamil Nadu. Re-elected to the assembly, Jayalalithaa became the first elected female chief minister and the youngest ever chief minister of Tamil Nadu, serving her full tenure of five years.
The Jayalalithaa-led AIADMK lost power in the 1996 elections when it won only four of the 168 seats that the party contested. Jayalalithaa was defeated in her constituency. Rampant corruption in the state government -- for which she was later convicted -- was seen as a reason for her loss.
Jayalalithaa was barred from standing as a candidate in the 2001 elections as she had been found guilty of criminal offences including allegations of having obtained state property. Nevertheless, the AIADMK won the polls and Jayalalithaa returned to her position as Chief Minister a year later, being acquitted by the High Court.
Her current term as Chief Minister is her third where she succeeded her nemesis Karunanidhi who held office for five years from 2006. The verbal sabre rattling between the two has been a hallmark of Tamil Nadu politics and often involves matters related to Sri Lankan Tamils, a volatile issue in Tamil Nadu.
Prior to the Indian elections earlier this year, Jayalalithaa was expected to play a decisive role in the BJP Government, helping it to make up the numbers for a majority in Parliament. However, the BJP recorded a landslide victory and her capacity to influence the government on Sri Lanka-related issues are limited.
It is unfortunate that the current controversy occurred at a time when India-Sri Lanka relations were on the mend since the Modi Government assumed office. However Colombo has responded to all of India’s concerns and the controversy over Jayalalithaa is likely to die a natural death in the days to come.
Order Gifts to Sri Lanka. See Kapruka's top selling online shopping categories such as Toys, Vegetables, Grocery, Flowers, Birthday Cakes, Fruits, Chocolates, Clothing and Electronics. Also see Kapruka's unique online services such as Money Remittence,News, Courier/Delivery, Food Delivery and over 700 top brands. Also get products from Amazon & Ebay via Kapruka Gloabal Shop into Sri Lanka.