A A A
As for the would-be Iranian bomb it is forgotten that the Shah, with US knowledge, was the one who initiated the research that he hoped could lead to a bomb. (There is no proof that Iran today is building one.)
At last we have a history of the Israeli bomb in a new riveting book “Fortress Israel” by the New York Times’ Patrick Tyler who has unearthed material that has never been explored in public before.
It was during the US presidency of Dwight Eisenhower that Israel’s political and military establishment decided to build a nuclear bomb. But Eisenhower was hoodwinked, although the CIA reported to him its suspicions about Dimona, the Israeli nuclear research site. His successor, John F. Kennedy, likewise, was gravely misled. 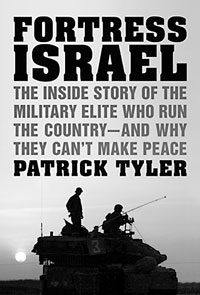 It was not until May 1963 that the Americans were pretty well convinced that Israel was building a bomb. Kennedy went into battle to stop it but the Israeli leadership constantly lied to him.
Kennedy invited Israeli Prime Minister, David Ben-Gurion, to the US in order to convince him to give up the bomb idea. He denied that they were trying. He agreed that the US could inspect the Dimona site where it was being made. But the American scientists were steered away from hidden doors and cosmetic barriers and never found the large underground laboratory producing plutonium, the raw material for a bomb.
Although in public the US agreed with Israel that the Dimona reactor was only for peaceful purposes Kennedy remained sceptical, with reason. Ben-Gurion told him at another meeting that in three or four years’ time Israel might need to produce plutonium.
The Administration continued to pressure Israeli for another look at Dimona. “Kennedy now understood he was being diddled” writes Tyler. Kennedy told Ben-Gurion that US “support for Israel would be seriously jeopardized if it should be thought that the government was unable to obtain reliable information on a subject as vital to peace as the question of Israel’s efforts in the nuclear field.” In mid June 1963 Kennedy again put the pressure on.

Ben-Gurion had put the Israeli relationship with the US at risk. He was cornered and he knew it. The reactor at Dimona was about to go critical and the underground facility was being readied to extract weapons-grade fissile material. In a patriotic gesture he resigned the premiership and it had the effect he wanted. Everything in the relationship was put on hold. A vital threatening letter from Kennedy was not delivered.
Later Kennedy continued to question the new prime minister, Levi Eshkol. But soon he was assassinated, relieving Israel of his relentless attention. His successor, Lyndon Johnson, convinced himself that if America gave Israel all the arms it wanted it wouldn’t want to continue manufacturing a bomb. He pressed for the US to look over Dimona but again Eshkol resisted him, reneging on a promise to let the Americans check it out.
Time moved on, Johnson resigned and Richard Nixon came in, making Henry Kissinger his National Security Advisor. Kissinger told Golda Meir, Israel’s first female prime minister, that the US would never pressure her even though the CIA had told him Israel had at least 10 atomic bombs. Ambassador to the US and later prime minister, Yitzhak Rabin, told Kissinger that, “Israel needed the bomb for two reasons: first to deter the Arabs from striking Israel and, second, if deterrence fails and Israel were about to be overrun, to destroy the Arabs in a nuclear Armageddon.” On Meir’s first visit to Washington to meet the new president the secret bomb was barely mentioned and, when it was, “it was in the context that Nixon had not determined his policy in nuclear proliferation; he was kicking it down the road”, writes Tyler.
And that is where Israel’s nuclear bomb has rested down to the present day- a can kicked out of sight. The US State Department has told me that it will “neither confirm nor deny” my question as to whether Israel has the bomb, a nonsensical observation since more than one top ranking Israeli has confessed that it does.
No US president apart from Kennedy has given his full attention to the issue and there is no sign one ever will.