A A A
Ziauddin defied the Taliban order and started a school which his daughter attended. He comes from a middle class peasant family. The Taliban believed that he got money from the Americans and the Zionists to run the school. Thus he became a Taliban target.
Malala was trained by her father to be an activist. Ziauddin told close friends, according to TIME, that he wants his daughter to be a politician. But the little girl wanted to be a doctor. Later in a video clip, she said she wanted to be a politician to create a just society. With the Taliban forcing the closure of girls’ schools in Swat and other places they dominate, Malala began her activism – her own Jihad – at the tender age of 11. 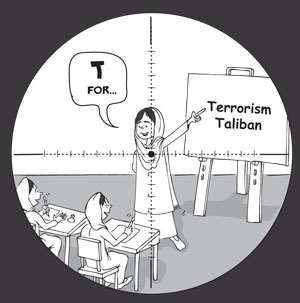 Under a pseudonym, she started to write a diary for BBC’s Urdu website, giving a detailed commentary on life under the Taliban rule. When her cover was blown, the Taliban threatened her, but it only strengthened the girl’s resolve to fight for her cause – education for girls. She shed her pseudonym and wrote under her real name. Soon she became popular and an inspiration to many Pakistani girls of her age group. According to statistics, the female literacy rate in tribal areas is a mere 7.5 per cent, though the central government allocates 2.2 per cent of GDP for national education. The government seeks to increase the allocation to 7 per cent in a bid to improve the country’s literacy rate, which is less than 70 per cent at national level and less than 22 per cent in tribal areas.
Appearing in a television talk-show a year ago, the little girl even had the courage to discuss the possibility of her own death at the hands of the Taliban.
“Sometimes I imagine I’m going alone and the Taliban stop me. I take my sandal and hit them on the face and say what you’re doing is wrong. Education is our right, don’t take it from us. There is this quality in me – I’m ready for all situations. So even if (God let this not happen) they kill me, I’ll first say to them, what you’re doing is wrong.”
Today, she is fighting for her life in a hospital in Birmingham, England -- with her father, mother, two brothers and millions of well-wishers praying for her recovery.
Anger and shock gripped Pakistan. Weeks ago the Pakistanis took to the street to protest against a YouTube video clip defamatory of the Prophet Muhammad. They were angry at the United States and YouTube for refusing to remove the film. But last week they took to the street to protest against the Taliban which are led by male chauvinistic pseudo religious leaders, although the crowd that turned up for the protests was small. The Taliban declare jihad or holy war on the West saying it is hell bent on destroying Islam. But they themselves have become Islam’s biggest enemy.
Little do these Taliban leaders know that Islam’s prophet was a women’s rights activist. He preached his reforms among men who buried the girl-child alive, for she was a symbol of shame to the family. The prophet declared that women were God’s trust. A man who ill-treats his wife is breaching this trust and is, therefore, answerable to God. He made seeking knowledge mandatory for every Muslim man and every Muslim woman. Women were given right to property. The man was ordered to pay a dowry to the woman and he prohibited the practice of the woman’s father usurping the dowry. In his time, women were encouraged to take part in community service. They were not prevented from coming to the mosque. In his last sermon, the Prophet emphasised women’s rights. When a person asked for a short-cut to paradise, the prophet said it lay under the feet of the mother.” 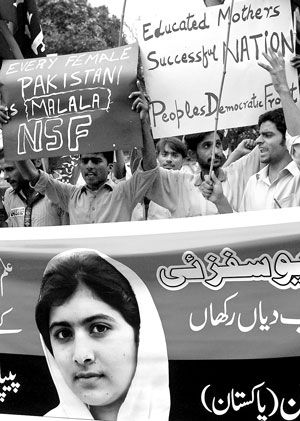 Alas, after the prophet’s death, male chauvinism gradually raised its ugly head and within a century or so, with Islam spreading into male dominant societies in Asia, Africa and parts of Europe, women once again became slaves to men.
Prof. Akbar S. Ahmed, who is Ibn Khaldun Chair of Islamic Studies at American University in Washington D.C., in his book ‘Islam Under Siege’ says, “When Muslim society is confident and in a state of balance, it treats women with fairness and respect. When Muslim society is threatened and feels vulnerable, it treats women with indifference and even harshness.”
To prove his point, he says the present sad status of Muslim women was a reaction to the European colonisation of Muslim lands in the 19th and 20th centuries. “This period of colonisation affected society both internally and externally. There was a loss of confidence, which resulted in a loss of tolerance.

Muslim men reacted to this loss, not unnaturally, by doing what they thought was necessary for the protection and integrity of their families. They secluded their women from the prying eyes of foreign troops. Burkhas, the black tent-like attire women wear, became common. Women were restricted to the home.”
Prof. Ahmed says that it is only through widespread education and the restoration of Muslim confidence that contemporary Muslim women can assume their rightful place in society.
Attempts by governments in Pakistan to take education to the tribal areas, however, have been met with opposition. In rural Pakistan, politically powerful landlords or Zamindars who have their own dacoit armies, see education as a major threat to their hold on the masses. Social mobility upwards which education offers is thus denied to the people who work like slaves in Zamindars’ fiefdoms.
The central government has little control over the tribal areas, which joined the federation, at the time of partition, on condition that tribal laws should supersede state laws. However, with the United States’ war on terror in Afghanistan spilling over to Pakistan’s tribal areas, the Pakistani government, under pressure from Washington, was forced to send troops to the tribal areas bordering Afghanistan to crack down on Taliban militants.
In the Taliban infested tribal areas of Pakistan, lack of education among the youth has helped the Taliban’s recruitment process. The uneducated and unemployed youth became easy recruits to the suicide squads of the Taliban who preach a warped version of jihad which literally means an act of striving.

The prophet’s teaching says that jihad is a continuous struggle to conquer one’s own base instincts and work towards a better and more harmonious world. In Islam, this jihad is called Jihad ul-Akbar or greater Jihad. One should first be a warrior in the greater jihad to conquer self and its base instincts before one wages the lesser Jihad or Jihad ul-Asghar, which is physically defending the Muslim community and only when it is under attack. The greater jihad teaches one to be compassionate and generous with one’s inner self being devoid of greed, jealousy and dishonesty. Seeking knowledge is part of this greater jihad. But the Taliban and their half-baked leaders appear to have missed this point and turned into killers.
Thus it comes as little surprise when the outlawed Tehreek-e-Taliban Pakistan or the Pakistani Taliban gleefully justified the act of terror it committed on Malala, whom they described as an American spy. They even called Malala a woman, a sinner who should be killed for standing in defiance of Shariah and divulging Taliban secrets to the enemy through her BBC diary in return for rewards from the Zionists.
The Taliban ideology is a canker in Pakistani society. It needs to be rooted out. But this can be done not only by taking education to the tribal and rural areas but also by ending the US occupation of neighbouring Afghanistan. Pakistan is in a mess largely because the US dirty war in Afghanistan. With the war spilling over to Pakistan’s tribal areas, people in Pakistan’s tribal areas live under constant fear of being killed in a cowardly unmanned US drone attack. Almost daily innocent children, women and men are killed in Pakistan and neighbouring Afghanistan. As the world prayed for the speedy recovery of Malala, three Afghan girls were killed in a NATO air attack on Wednesday. There was hardly anyone in the West to shed a tear for these three girls.
As long as the US dirty war continues in Afghanistan and Pakistan, the Taliban will continue to have some public support notwithstanding its gruesome attack on Malala and similar acts of terror. Many people in Pakistan believe that the war in Afghanistan is in effect a war to denuclearize Pakistan. Naturally, there is elation when the Taliban scores a victory against the occupying forces.
The Taliban can be defeated only when there is major erosion of their support base. Military action against the Pakistani Taliban is not the right solution, though some express such views in the aftermath of the attack on Malala. But Ansar Abbasi, an influential conservative commentator, wrote for the Pakistan daily, The News, warning that such an operation would be a trap. “They (the West) want to use the poor girl’s case to create further chaos and anarchy in Pakistan,” he said