A A A
Is there anybody who watches and listens to it on YouTube not moved to the soles of their shoes? I’ve heard it a hundred times and still it stirs me. His dream that one day his children would “not be judged by the colour of their skin but by the content of their character” is one of the greatest lines in all oratory. The south of the US, he said, was “sweltering with the heat of injustice, sweltering with the heat of oppression”.

Within ten years of the end of America’s civil war, fought over the issue of slavery, southern white Democrats had established state constitutions that stripped black citizens of their newly-won political rights. Terrorist groups like the Klu Klux Klan destroyed black schools and churches and murdered at will. At the time of Dr. King’s speech they were still doing it. Three weeks after his speech, Klansmen bombed a Baptist Church in Birmingham, Alabama, killing four little girls.
At the time of the march on Washington I was working in Africa. But at the next great event in the civil rights movement in 1965 I was there- in Selma, where Dr. King led marchers from the segregated town - where a black couldn’t even sit in the same cafe as a white man to drink a cup of coffee - to the state capital of Montgomery. After the police had tear-gassed, badly beaten, whipped and cattle-prodded the hundreds who first marched, tens of thousands flooded in from the four corners of America to join the march. Again Dr King spoke. Again America shuddered. Within a week President Lyndon Johnson had announced he was sending to Congress a Bill that would remove all impediments to voting by black people.
It was President Johnson, the same president who engulfed America in the bestial Vietnam War, who rammed this Bill through Congress and before that had rammed through the Civil Rights Act that made illegal all discrimination in restaurants, bars, transport, public seating, educational institutions and jobs. 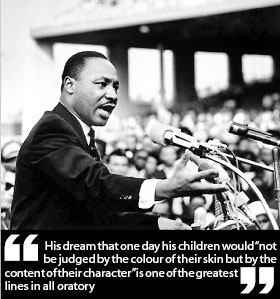 This was the revolution but after that, let us not forget, the media almost lost interest in Dr King. I worked for him when he moved his campaign out of the south to Chicago where, despite blacks long having the vote, they still lived in ghetto slums, went to inferior schools and whose only significant middle class were the priests and preachers tending to their flocks. We did the same work in those ghettos that a young Barack Obama did a generation later- organising tenants to confront their landlords, persuading the notorious gangs to lay down their arms and marching into white neighbourhoods where home owners made sure no blacks moved in. We made some progress but the north proved a tougher nut to crack than the south. I remember sitting in staff meetings in Dr. King’s small apartment in a slum neighbourhood with him, frustrated and searching out loud for us to find a way to crack that nut.
The nation’s press, when not ignoring Dr King, gave him a hard time, saying he had lost his touch. Their attention turned towards those who advocated a harder line, even violence- Malcolm X, Stokely Carmichael and the armed Black Panthers. This was better copy than non-violence. Later when Dr. King opposed the Vietnam War the New York Times editorialised that the civil rights and the anti-war movements should not be mixed. (“I didn’t mix them, the war mixed them” replied Dr King.) Even the white liberals were deserting him- the cruelty of American white-dominated politics which is now conveniently forgotten and covered over.
But 50 years later we can measure the legacy of Dr. King. No one else in American history, and perhaps the history of the world, has achieved so much social engineering in such a short time. He was responsible for the advance of the underdogs of society at an incredible speed. Who would have thought there could be a black president today?
Who would have thought that the lives of blacks could change so profoundly? In 1959, 55% of blacks lived in poverty and only 4.5% of young blacks had graduated from college. In 2010, 36% of blacks went to university and most blacks are not poor. One in ten members of the House of Representatives are black. Blacks have become the bosses of major world companies and occupied the highest posts in government, academia, business, banking and the military. The middle class has mushroomed. Blacks have much more self-confidence and self-esteem.
There is a list, a page long, of what is still wrong and grossly unfair. But the train of black progress left the station a long time ago - and it is still picking up speed. Listen to that speech!