A A A
The last four Popes, including Benedict who has just announced his retirement, would never have supported the Hiroshima bombing. Neither did they support the wars in Vietnam, Iraq and Afghanistan. They believed in moral talk here and now.
“Moral talk” led Pope John Paul to wage a long and successful fight against communism in his homeland, Poland. Indeed, many say that victory was the catalyst for the fall of communism in the rest of Eastern Europe and the Soviet Union itself.
“Moral talk” led to Pope John, the great reformer, to use his position to tell President Lyndon Johnson to his face that the Vietnam war was immoral.
Benedict is cut of the same cloth, with some interesting shades of emphasis. He is first and foremost a scholar (and as we know by now a bad administrator). He is a disciple of St Thomas Aquinas who wrote in the 13th century. Thus Benedict saw the morality of the Church as part of a continuum embracing the right to life and its principle ingredients: conception, the sanctity of marriage, the resisting of artificial contraception, abortion, capital punishment and most wars. It also meant being in favour of democracy. (All but ignored, Thomas wrote about the need for democracy and the popular vote.) The sanctity of life made up Benedict’s moral universe. In all this he was philosophically consistent unlike American evangelicals who are pro war, capital punishment and guns against abortion.
Benedict didn’t just draw on the teaching of Jesus, Moses and St Paul for inspiration but he argued strongly for “natural law”- the law that is instinctive to mankind almost everywhere. For example neither Jesus nor St. Paul condemned rape. But natural law leads societies everywhere to outlaw it. 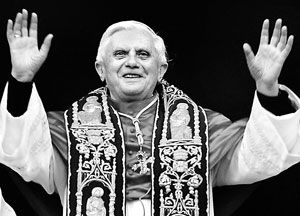 In this sense he was a “good man”, in that he was attempting to strive for what is best, even if he was not a “good man” in not forcing his Church to be totally open and honest about the decades (perhaps centuries) of clergy paedophilia.
On some of the great contemporary personal issues of today- abortion, contraception, pre-marital sex, divorce and married priests, it wasn’t so much a question whether he was morally good or bad but whether he could adjust to changing technology and changing times. Abortion is not like it was a 100 years ago- secretive and dangerous. Neither is contraception in an age of over-fast population growth and AIDs. The Old Testament accepted divorce and early Christians did not query it. Bachelor priests are a late addition to Catholic doctrine. Pre-marital sex in an age of contraception cannot be as irresponsible as when 2000 years ago a baby was often enough the outcome.
Some would say, as they have said about most twentieth century Popes, except John, that Benedict was obsessed with a narrow understanding of sex. But that ignores the great philosophical contribution he made on love in one of his encyclicals. The long essay argued that love in all its aspects should be the conviction we value above all others. Moreover, Eros- sexual love- was the most powerful ingredient in the human character which is why it had to be cherished and treated with the utmost care and respect.
When it comes to his attitude to Islam and other religions his viewpoint becomes mixed and murky. On a personal level he made a great effort to meet and talk to Muslims. But Muslim distrust of him was inflamed by the speech he made in 2006. He quoted favourably a Byzantine emperor who said that Islam with its tolerance of war and violence brought about things “evil and inhuman”. Overlooked by Benedict was the role of the Church when it was incorporated into the Roman Empire after the Emperor Augustine became a Christian. The Church accepted living under the laws of a militarised dictatorship. Or the crusades which led to terrifying wars with Islamic peoples, slaughtering wholesale their men, women and children. Or the Inquisition which used torture against Muslims, Jews and dissenting Christians. Or the Church’s quietness during the rise of the Nazis and the persecution of the Jews.
For a moral person it might be easier to become a Muslim, the most tolerant of the three deistic religions, historically the less violent and one that believes in one God, not three like the Christians’ Father, Son and Holy Ghost.
The next Pope might well be black, as Benedict said a decade ago. That would be a good move. But it would be better still if he could be, whether black, white or brown, another John and engage in a great reform.