A A A
Hopefully Obama can recover this lost ground in the next two debates, one on domestic policy, the other on foreign affairs.
The economic case is one of his strengths yet he refused, for reasons untold, to blow his own trumpet. Ex-president Bill Clinton did a better job on Obama’s behalf in his speech at the Democrats’ convention.
Obama inherited from President George W. Bush the greatest economic disaster since the Great Depression of the 1930s. He also inherited the consequence of the big banks’ biggest rip-offs since that time too.
Obama’s Recovery Act was massive- over $800 billion, larger than Roosevelt’s entire New Deal in constant dollars. Obama has struggled with Congress to make this much bigger but the Republican majority continuously blocked him, as they have on so many other things. Nevertheless, compared with Europe, the US is well ahead in the recovery of economic growth. Unemployment is now beginning to fall, consumer confidence is increasing and people are buying houses again.
Obama bailed out the bankrupt car manufacturers, GM and Chrysler. He succeeded faster than anyone expected and the companies paid back the government’s loans well ahead of schedule.
Not only did the Recovery Act lay the foundation for resuscitating the economy, it was the most transformative energy bill in history. It has financed unprecedented government  investments in a better electricity grid, cleaner coal, a substantial increase in energy efficiency, “green collar” job training, electric vehicles and the infrastructure to support them, advanced biofuels and the refineries to brew them, renewable power from the sun, wind and heat below the earth’s surface. He persuaded auto manufacturers to go to 54 miles per gallon by 2005 which is double of that existing when he took office.
Obama poured $90 billion into clean energy, leveraging another $100 billion in private capital. His stimulus is creating the world’s largest wind and solar plants, the country’s first ethanol refineries, zero-energy border posts and a bullet train that will link Los Angeles with San Francisco in less than 3 hours. His government is creating practically from scratch an advanced battery industry for vehicles and set up a new government agency to incubate cutting-edge energy research. 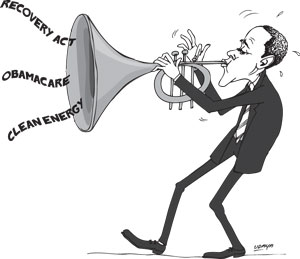 He initiated the biggest expansion of anti-poverty initiatives since the presidency of Lyndon Johnson and the largest middle class tax cut since Ronald Reagan. He is spending $8 billion on a new high-speed passenger rail network that now lags way behind Europe’s and China’s. He poured $7 billion into expanding the country’s high-speed Internet network to under-served communities. He has enabled the improvement of sewerage plants, the repaving of roads and kept many state employees in jobs.
Clinton, still a hero of the electorate, the most popular ex-president since Reagan, didn’t achieve half of this. His $6 billion energy bill was quickly shelved and he cut welfare.  Likewise, Clinton’s effort to pass a public health bill. He failed. Yet despite a hostile Congress the president managed to ram through Congress the Obamacare health bill that is giving 30 million of the poorest health care insurance coverage. At last America has joined the civilised world with full health care for its people. Romney has vowed to repeal this on his first day in office.
Obama recently made a significant reform of the US’s appalling treatment of immigrants. Congress attitude has made it impossible to enact large-scale reforms but he has by executive order lifted the threat of deportation on youngsters who were brought to the US by their illegal parents.
All along he has fought for a liberal reforming agenda. He has implemented Keynes which the Europeans with their misplaced fiscal austerity programmes have not. What have the Europeans to show in comparison- and they don’t face the checks and balances that America constitutionally does? Moreover, if the Republicans hadn’t savaged proposal after proposal much more would have been achieved and economic growth would be faster- and that would help the rest of the world increase its growth rate.
He has not been good on human rights although very importantly he has banned torture which Romney says he will bring back.
Foreign policy has been marked by a profound change of atmosphere compared with Bush’s tenure. US troops are out of Iraq. Osama bin Laden is dead. The Arab Spring for the most part has been encouraged. He has been cautious about both Iran and Syria, realising military intervention would be counterproductive. Unforgiveably Afghanistan badly blots his copy book.
Obama must blow his trumpet, otherwise he could lose the election.