A A A
But news and truth, as Walter Lippmann observed, should never be confused. The truth is, as a report by the United Nations showed, that Sweden is probably the most successful country in the world - that is if you factor in not just national income, but the longevity of its people, low infant mortality and high levels of education. Moreover, a new study by Professor Richard Florida of Carnegie Mellon university which measures the kind of creativity most useful to business - talent, technology and tolerance - puts Sweden number one in Europe and ahead of the US. In the future, Florida argues, this means that Sweden will become a “talent magnet” for the world’s most purposeful workers.
Yet there is another side of Sweden. If one walks down the out-of-the-way, dirt track that led me to the shores of the Baltic on the island of Fårö one will come, hidden both by forest and the unwillingness of the local people to divulge its whereabouts, to the house of film maker Ingmar Bergman. For a lifetime Bergman chronicled the Swedish soul, its solitariness, its obsessiveness and its melancholia, a trait he shared with other Swedish artistic geniuses - it’s in the poetry of the recent Nobel Literature prize winner Transtromer, the music of Stenhammar, the paintings of Zorn and the writings of Strindberg and Dagerman.
Maybe it is this- plus the long, dark, grey winters- that will succeed in keeping Sweden partially cut off from the world. Despite its successes at least half its population prefers to be a step apart. Swedish voters turned their back on the Euro. This is the European country that along with France loves itself the most, is comfortable in its old ways, is wedded to its cradle to the grave welfare state despite the high taxes needed to support it, and lives a life that is distinctly introverted. You can see it in “medieval week” in the walled city of Visby in the neighboring island of Gotland where visitors come from all over Sweden just to walk quietly around in medieval dress. 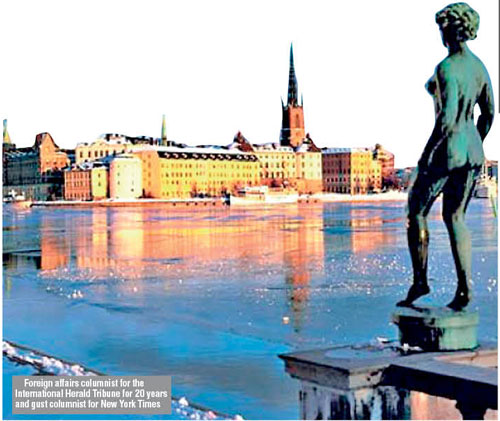 The real truth is that the two sides of Sweden coexist, and not altogether uneasily. Sweden has more multinational corporations per head than any other country and, despite its socialism, state-owned enterprises barely exist. Sweden has pioneered private competition in a range of endeavours from railways, to hospital management, to schools. Immigrants have been welcomed generously. Sweden has been the only country in Europe not to insist on some years of transition before the workers of the new eastern members of the Union are granted the right to free movement.
The Swedes have been called the Japanese of Europe - the consensual society where disputes are talked out even if it takes hours, days and months. The idea of the adversarial debate, whether it be in parliament or the courtroom is regarded as uncivilized. Yet at the same time Swedes are immensely individualistic- this is the country that pioneered sexual freedom and women’s emancipation. Late teenage sex is accepted unblinkingly. The divorce rate is the highest in the Western world.
If you want to understand Sweden you have to understand its Lutheran heritage. Whilst Church attendance except at Christmas and Easter is extraordinarily low probity is in the Swedish soul. Honesty in business is one reason why Swedish firms shine abroad. A handshake seals a deal. Rarely is an idea over sold. Bills are paid on time. If you are in a serious relationship infidelity is not acceptable. If it happens then it usually means separation.
Swedes have consciously chosen not to take the Anglo-Saxon road. They have one of the lowest take home pay envelopes in the Western world. The state taxes away almost half of it. And as for the rest Swedes would rather take long holidays and a short workweek than push up the national income figures. Outsiders may say that Sweden, once the richest country in Europe in terms of GNP per head, is losing its way. Insiders are content. The economy purrs along. Over the last decade it has been the best performer in the Western world.
Swedes travel. They know the virtues - and temptations - of the outside world. They all speak English, even the garbage men. But they are not going to quickly change. The big news in a news-less country is that even in our globalized world you can be different. Indeed it may be that, as Professor Florida observed, the world in future may come to Sweden, rather than, as long expected, the other way round.