A A A
That the victims of Wednesday’s bomb attacks were largely Shiite pilgrims indicates that the sectarianism created by the presence of foreign troops in Iraq is raising its ugly head again.
During Iraq’s many decades of dictatorship under Saddam Hussein or his predecessors, sectarianism had remained confined to history books or the dustbin of history. Some 14 centuries ago Iraq was the epicentre of a major explosion that divided Islam into two – the Sunni and the Shiite streams. Iraq also became a major battleground when the Sunni Ottomans and the Shiite Safavids from Iran clashed in the 17th century. But when the Ottoman rule ended in Iraq with Turkey’s defeat in World War I, the Iraqis had become united and developed a common Iraqi identity with a socialist ideology taking root among the country’s intelligentsia and the working people.
Sectarianism had little place. So much so that when Britain manipulated the League of Nations – the predecessor of the United Nations – and obtained a mandate to govern Iraq after the end of Word War I, it could not put into practice its time-tested divide-and-rule policy because the Iraqis were united. Britain had to depend on corrupt Iraqi aristocrats to run the country, a move that only increased the resolve of the Iraqi people to resist British occupation.
The Brits came to Iraq after WWI, claming they were coming as liberators, not as occupiers. In 2003, when the American occupation force invaded Iraq, President George W Bush made a similar statement. The real aim of Britain then -- just as was the aim of the Americans nine years ago -- in occupying Iraq was to take control of its oil.
Under a 1916 agreement, Britain and France in the face of an imminent Ottoman defeat in World War I divided the Middle East between them. Iraq, together with Palestine and parts of Arabia became the possessions of Britain while France took control of Syria, Lebanon and some regions of North Africa. France wanted Iraq’s oil-rich Mosul area, but Britain would not share oil with any country. Oil-less Britain was so greedy for oil that it vehemently opposed even a US proposal that there should be more international competitiveness for the commercial exploitation of Iraq’s oil. In the 1930s and the 1940s, Britain owed its affluence largely to the oil wealth it robbed from Iraq and Iran. 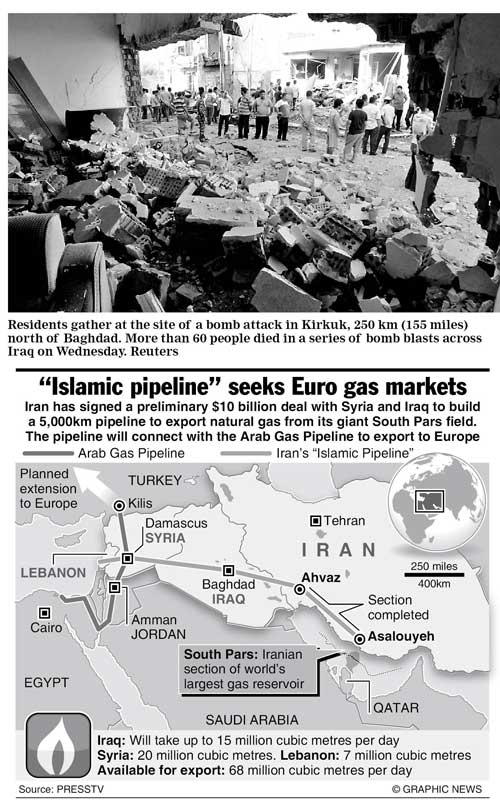 However, Britain had to leave Iraq in ignominy – just as the Americans left Vietnam in the 1970s -- unable to withstand the people’s power that rose against the occupation.
But where the British failed, the Americans succeeded. This was in reinventing sectarianism.
Iraq for the first time since the Ottoman-Safavid wars of the past was beset by sectarianism after the US invasion. Saddam Hussein may have been a tyrant and a killer, but was not a sectarian bigot. True, Saddam, a Sunni, killed thousands of Shiites in the country’s South, but he also killed thousands of Sunnis in the Kurdish north. He was equally ruthless towards the Arab Sunni Islamists.
During his reign, the Sunnis and Shiites inter-married and lived in each other’s neighbourhoods. But the scenario changed with the US invasion of Iraq. The Sunnis and the Shiites began to kill each other. Inter-marriage became taboo. The Sunnis living in Shiite areas moved out while the Shiites living in Sunni areas did the same.
It all began with the holy places of the Shiites coming under suicide bomb attacks – the first to be attacked was the Al-Askari mosque. At the beginning, the Iraqis blamed the Americans and other foreign forces for the attacks. It was only when the intensity and the frequency of attacks increased that the Iraqis began to believe that their country was in the midst of a sectarian war.
The foreign troops were the catalyst that started this fratricidal war, say the Iraqis. To support their claim, the Iraqis cite numerous so-called terrorist incidents where the British and the American hands were evident. Adding to the confusion were the entry of Israeli and Saudi intelligence groups and the so-called al-Qaeda in Iraq. They all contributed to the instability of Iraq so that the plunder could continue behind the mayhem and muddle.
But today, the Americans have gone, but only on paper. According to Iraqi reports, tens of thousands of US troops are still in Iraq ostensibly to give military training to the Iraqi armed forces. In addition to that, some 15,000 US military personnel are working as diplomats in the US embassy in Baghdad. They enjoy diplomatic immunity and therefore the freedom to commit any crime. Also in Iraq are thousands of American mercenaries working for private security firms such as the blacklisted Blackwater, which now operates under new names Academi and Xe Services. These private security men, most of whom are ex-servicemen, behave like thugs and often cases filed against them in US courts for crimes committed in Iraq are dismissed for lack of evidence. So they have a field day.
Whoever is destabilising Iraq is apparently not happy with the current situation there. The United States justified its invasion of Iraq on grounds that Iraq had weapons of mass destruction which posed a threat to world security. When the US could not find a single WMD, the Bush administration said its mission in Iraq was to establish democracy.
But dealing a blow to the Americans, democracy has given Iraq a government which is friendly towards Iran, an enemy of the US. Nearly 5,000 US soldiers died and nearly one million Iraqis lost their lives for an outcome that went counter to the original aim of the invader. The Americans came to Iraq to set up a client state and plunder its oil resources. Although, the Nouri al-Maliki Government had accommodated multinational oil companies, it has been resisting US pressure to enact an oil law that would expedite the privatisation of Iraq’s oil fields. 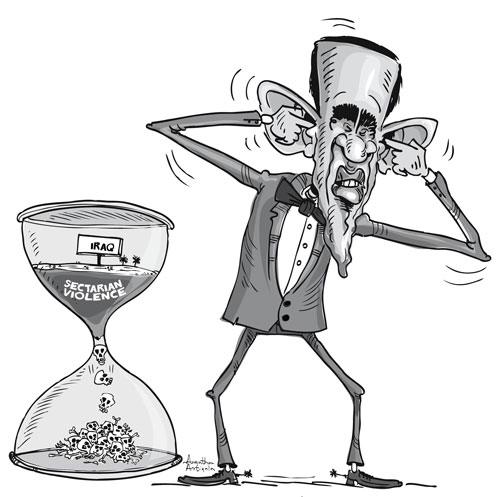 It has also strengthened its ties with Iran to such an extent that Iran’s hand is seen in many a government move– be it the Syrian crisis or the oil price. The Maliki Government is a shaky coalition which owes its survival to the secular al-Iraqiyyah party and some 40 MPs loyal to radical Shiite cleric Moqtada al-Sadr, a staunch nationalist. Last week, the coalition partners – al-Iraqiyyah and the Sadr group -- threatened to support an opposition–sponsored no-confidence motion against the government. The timely intervention of Iran in the form a fatwa issued by Sadr’s mentor, Ayatollah Kazim al-Haeri, declaring any alliance with secular parties as un-Islamic, prevented the fall of the government.
This week, Iran and Iraq, whose coffers are once again brimming with oil revenue after decades of sanctions and turmoil, announced that they would work together within the Organisation of Petroleum Exporting Countries (OPEC) to stop any further decline in world oil prices. Last year Iran, Iraq and Syria signed a multi-billion dollar deal for a pipeline that will carry Iranian gas to the two countries and Europe. On Syria, Iraq is as strongly opposed to any foreign intervention as Iran is.
A political alliance between the Middle East’s two large and oil rich Shiite dominated countries is the last thing the Americans or their client Arab Gulf states such as Saudi Arabia would like to see. But it is happening. This can be stopped only by plunging Iraq into a sectarian hell hole. And that’s happening.