A A A
The Friday Forum, one of Sri Lanka’s most respected independent groups on socio-economic issues, last week expressed concern  that the people were losing confidence in the public education service because of party politicisation, militarisation and the lack of a national education policy. 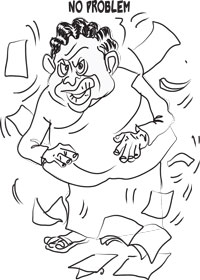 Friday Forum members, including former Colombo University Vice Chancellor Savithri Goonesekera, veteran diplomat Jayantha Dhanapala and Colombo’s former Anglican Bishop Duleep de Chickera whose prophetic voice has often been heard loud and clear against social injustices, highlighted five issues of concern in the education sector. The issues were lack of priority given by the authorities for consultative policy planning, political appointments to key posts, inadequate resources for education, military training for undergraduates and the long drawn trade union action of university teachers.
The Friday Forum said the autonomy of the universities must be restored and decisions should be taken by the university senate and not the Ministry of Education or Higher Education. Dr. Dhanapala asked whether giving military training to university students meant they were supposed to take orders without questioning or thinking. In a university, students are given the opportunity to engage in research and criticize and that was how education developed.  Former Bishop Chickera stressed the need for a proper dialogue where different parties freely express their ideas and listen to the ideas of others in a spirit of openness and accommodation which is vital for conflict resolution on a win-win basis.
The Friday Forum also  said the education sector was one of the millennium development goals in the Mahinda Chinthanaya policy, but the recent trend was such that statutory policy advisory bodies like the National Education Commission had been side-lined and made dysfunctional.
The Friday Forum sharply criticized the University Grants Commission saying that while in the past the UGC upheld the concept of academic autonomy incorporated in the Universities Act, it had now become a convenient conduit for implementing ad hoc decisions of the minister on the management and re-sourcing of university education. As a result, eminently qualified educationists do not apply for the posts of Vice Chancellor or posts in the university councils, and these posts were often given to friends or those who were allies of the regime or the minister.  Instead of dismissing the Friday Forum also as an anti-government NGO or even a Tiger-front, Government leaders need to be humble and magnanimous in listening to such eminent personalities to prevent education from turning into anarchy.