A A A
There are those however, the rest of the struggling masses of our nation, like Lazarus in the parable sitting by the gates of those feasting government bodies waiting for at least the scraps for survival. But even that is not forthcoming. Thankfully there is dynamic activity that begins to operate. Those who are experiencing bondage or oppression are susceptible to that activity. It germinates in the heart as a physical force in motion. It’s primarily to correct that what needs to be; or to do away with what ought not to be. 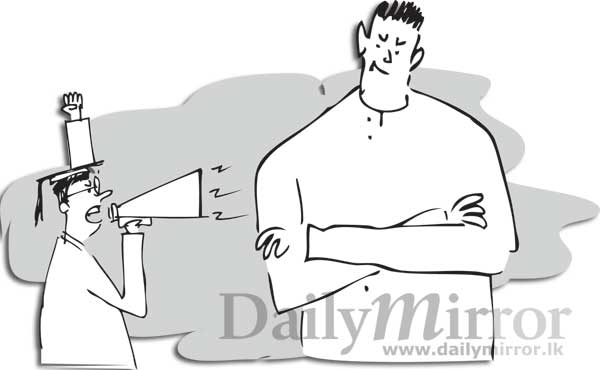 In this light we heard of the Federation of University Teachers’ Associations (FUTA) joining up with the UNP, JVP, civil society groups and other opposition political parties for a protest march from Galle to Colombo. The Inter-university Students’ Federation (IUSF) and the Frontline Socialist Party marched from Kandy to Colombo. Both groups came into Colombo on Friday for their rallies. The Government needs to take note of these protests and not try to stop such protests with the customary brute force. There is no need to show its power, only its ability to understand and do something. A protest is the final cry of those who feel helpless and have no one to go to. Being pro-active is healthy and good.
On the other hand refusal to heed the cry of the students, teachers and civil society would push their frustration and despair to negative activity. This could give rise to armed rebellious tendencies. We may think we have done away with the L.T.T.E after the 30 year war, but let’s remember it came to be because of the insensitivity of past leaders and their selfish ambitions. We don’t have to breed them once again. The psyche of the governing individuals of today hasn’t changed  and that’s why this Government needs to listen and start governing in honesty.
The Government need not feel it’s a sign of weakness to listen and take remedial action. In fact it’s only when  a government knows it is strong that it is not afraid to be humble nor feels threatened. As they say the gods give a last chance for governments to sustain themselves by sending voices of protest, advice and caution. Failure to heed topples even empires.