The military’s crackdown in Egypt was foolish. Democracy is not. Without democracy there is no way of arbitrating the clash of interests, the demands and beliefs in this gravely disturbed society.
The military/civilian government, instead of resolving to break the back of the Muslim Brotherhood and thus, counter-productively, drive it underground, should speed ahead with a fast re-write of those clauses of the constitution that offend liberals and secularists- on the role of women and the place of shari’a law- and then immediately call an election open to all.
All this could and should be done within three months at the most.
It is highly unlikely that the Brotherhood would win this time but if they did, they should be allowed their victory- as long as they promise the present interim government not to use their position to re-create the kind of rule that was the undoing of the deposed president, Muhammad Morsi. 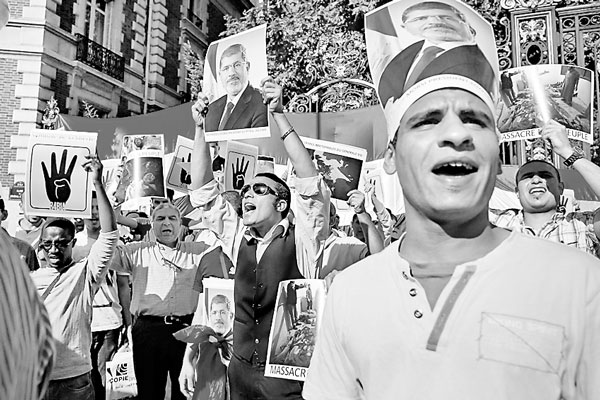 Protesters hold placard reading “R4BIA” (L) and posters of Egypt’s ousted president Mohamed Morsi during a protest against army-installed Egyptian government, in front of the Saudi Arabia’s embassy in Paris, on August 20, 2013. France on August 18 called on Saudi Arabia and Qatar to help find a solution to the crisis in Egypt. AFP
Democracy was a Greek idea. It did not last even there and it was forgotten for two thousand years. Some of the thinkers of the European Enlightenment resurrected the idea, blending their classical knowledge with a romanticised idea of ancient Athens.
Not all of them were so taken by these new thoughts. De Tocqueville wrote about “the tyranny of the majority”. Edmund Burke called the democracy of the French Revolution, “the most shameless thing in the world”.
Democracy returned to the world stage during the struggle for American independence and the founding of the American republic, although at first, the Greek idea was anathema to its leaders.
Next it appeared in France, born amid the struggles of the French Revolution and its turbulent aftermath.
At the end of the Second World War there were only six practising democracies in the whole world.
Before the war, democracy was never the norm and only became more widespread in Europe because of the resurgence of liberal values that tried to make sense out of the carnage of two horrific world wars and because of the creation of the precursor of the European Union.
Later, in the 1960s, there was the birth of the human rights movement, led by the founding of Amnesty International, now one of the world’s most influential lobbies.
The American presidency of Jimmy Carter pushed the idea of democracy to the fore, especially in Latin America and Africa with significant success.
Modern day democracy is in many ways a poor shadow of the Greeks’. The Greeks made everyone equal before the law and enacted a meritocracy.
As Pericles said, Greece’s greatest orator, democracy is also about taste, responsiveness to beauty, sobriety of judgement and respect for wisdom, discretion and generosity. The Greeks’ code of ethics, as the philosopher Bernard Williams has argued, was enforced not by the sense of sin but of shame, and often shame at not living up to these high values.
Plato, who didn’t approve of democracy’s commitment to the transfer of wealth from the rich to the poor, strongly disapproved of democracy. He believed that in the best form of government philosophers would rule.
In newly liberated America democracy had its detractors too. The most influential was James Madison who believed that America was too big for effective democracy. Over the centuries, democracy has continued on its onward path, giving America a strong sense of self-esteem. But in France the early ideas on democracy ended with the dictatorship of Napoleon and before too long the restoration of the dynastic monarchy. Only later did democracy slowly emerge in practice.
Today, there are many examples of the weaknesses of democracy.  In Asia, Africa, Latin America and Russia where democracy has advanced in recent years, there are side by side in the same country serious abuses of human rights and widespread corruption. In the US of President George W. Bush Jr., torture was carried out in secret.
If we want democracy to continue we will have to fight for its integrity - we always have to remember Churchill’s argument that democracy is the worst system, apart from all the others.
“Democracy”, wrote historian Norman Davies, “has few values of its own: it is as good or bad as the principles of the people who operate it. In the hands of liberal and tolerant people it will produce a liberal and tolerant government. In the hands of cannibals it will produce cannibals.”
Real democracy will not come easily to Egypt and we know that already.
It won’t solve every problem but if there is a fair and liberal constitution to underpin it and if parliament could behave with maturity, self-discipline and both it and the president respect the constitution then it has a chance of working.
What other course can hope to resolve the present bloody situation and save Egypt from a dark and despairing future with a declining economy, human rights abuses and overwhelming violence?