A A A
Last Sunday as all the cricketing nations in the world prepared to watch the finals of T20 World Cup, there was another match being played just before that… the Women’s Finals. Who watched it? No doubt about it; when placed against the all-powerful men’s game, it faded into insignificance.
I was having a late lunch at ‘Cheers Pub’ that day when a widescreen in the background was showing the match being played. No one (neither man nor woman) bothered to take a second glance at the game.
Not a women’s game
I spoke to two men over a glass of beer at the pub- one an Australian and the other an Irishman. When I asked them what they thought of women’s cricket, their first reaction was to laugh out loud and that so to speak, summed up their sentiments on the subject.
On a more serious note, they seemed to be of the opinion that ‘cricket’ was not really the game for women. If at all, they said the rules of the game should be changed, for example, the boundaries should be brought in and the crease shortened.
The logic behind the shortening of the crease being that women bowl slower balls and therefore, a shorter crease would increase the reaction time. (I am not sure of the technicality).
Some like to think (according to a comment I saw on a website) that women’s cricket in general relies less on the big shots than the right shot, the lack of power means that the technique of the batter (not batswoman) has to be at a very good level.
Be that as it may, when one compares the number of sixes and fours played in the game, one can clearly see the difference in separating the men from the women and certainly why cricket on the men’s side is at a more professional level. Cricinfo.com reported that the men raked in 405 fours and 189 sixes, while the women managed only 113 fours and 30 sixes. 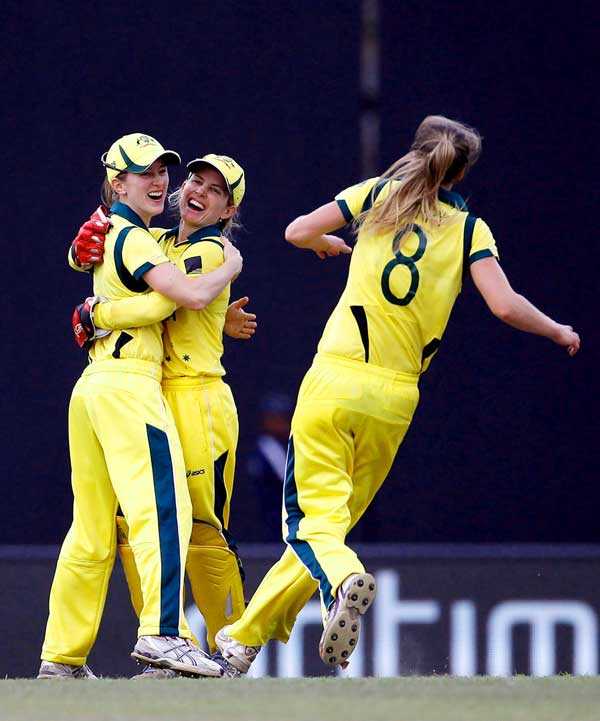 A work in progress
Just before I met this beer drinking duo, I happened to have a chat with a foreign journalist who worked for a cricket website, while he was cooling off in the pool. When I asked him why he wasn’t at the grounds for the women’s match, he said that no one was interested in the game!
It is not that the game didn’t get any coverage at all, but it was minimal when compared to the men’s game. The media works on the number of eyeballs following them.
Considering all, it seems that women’s cricket does not seem to have such an appeal to the male watcher. As suggested by one of the jocular beer drinkers at the pub, the players were so dressed up. A rather sexist remark, but look at the rating beach volleyball and even tennis has!
If one scours the Internet one would see some interesting headlines like “Is women’s beach volleyball only added to the Olympics for men to watch”, “Olympics beach volleyball, sport or peepshow”, giving us the general direction in which women’s sports are viewed by men.
There was an article in Mail Online, which says that even when it came to per diems at the recently concluded ICC T20 World Cup, men were given £62, while women were only given £32.
According to this news report, even the price money far outweighed in favour of the men- £619,000 as opposed to a mere £37,000 for women.
The article also comments, “This is just as it should be, owing to the superior commercial pulling power of the men’s game... The (women’s) game is still a work in progress.”
Chicken and egg situation
Clearly, some tinkering needs to be done in regard to the women’s game to make it more appealing, so that television ratings can be moved up.
From the point of supporting the game, for the sake of its betterment, it does not seem to have any appeal to even the hardened women’s libbers as was obvious from near empty stands at most of the ICC Women’s matches played here. Spectator levels were similar to a second eleven-cricket match played at a school ground.
When I asked a female colleague as to why she didn’t watch the T20 Women’s Finals, she said that she was getting ready to go to the men’s T20 being held later at Kettarama. I suppose that firmly puts the sad case of women’s cricket in a nutshell.
It is a chicken and egg situation. If the game is to become big, we need to have the big time businesses to support it, but for that to happen, the game must be big.
In the end, the spectators, media and the advertisements are looking at the power of the game and for that, we need the big scores and the mighty hitters and in women’s cricket we don’t seem to have the super women to deliver. So, it looks like women’s cricket is going to be on the B side for a long time.
(The writer can be reached via michael.soris@gmail.com)